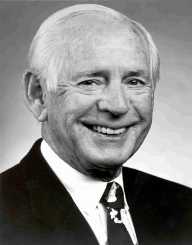 John Francis “Jack” Buck was born on August 21, 1924, in Holyoke, Massachusetts. His parents had six more children. His father Earle worked as a railroad accountant, and his mother was a housewife. During his childhood, he often listened to Boston Red Sox baseball game broadcasts and dreamed of becoming a sports broadcaster. In 1939, the family moved to Cleveland, Ohio for his father’s work. However, a tragedy stuck not long after, when his father died of uremic poisoning related to high blood pressure.

To support his family, Buck wanted to quit high school but decided to finish. He graduated from Lakewood High School in 1942. After that, he went to work on an iron ore freight boat on the Great Lakes. He began working as a porter but later became the night cook and baker. He wanted to become one of the “deck watch” teammates, but during a physical examination, it was revealed that he is colorblind. In 1943, he was drafted for the United States Army.
Military career and college

Buck was physically well prepared to serve in the Army since work on ships made him very strong. He began his army service with anti-aircraft training in Fort Eustis, Virginia. After basic training, he became an instructor and was promoted to corporal rank. He also was an active boxer. In 1945, Buck was deployed to Germany, where he participated in the Battle of Remagen. He was the squad leader and was wounded in his arm. He received treatment in Le Mans, France and was awarded the Purple Heart. After that, he turned down a request to withgo training as an Officer and became a guard of German prisoners of war. He ended his military career in 1946.

Buck returned to the United States and once again began working in various industrial jobs. His friend Bill Theil was going to attend Ohio State University, and Buck decided to enroll together with him. At first, he did not have any paperwork to enroll and attended only the classes he wanted. After officially enrolling, Buck majored in radio speech and minored in Spanish. During his college years, Buck was broadcasting the Ohio State basketball games. After graduating, he became to broadcast games for Columbus Red Birds. In 1953, he was the voice of the International League Rochester Red Wings.

In 1954, Jack Buck began working as a broadcaster for KMOX radio station, broadcasting games for Cardinals. However, in 1959, he was dropped from the station and replaced with Buddy Blattner. He then moved on to work for ABC on the Saturday Game of the Week telecasts. He returned to Cardinals game broadcasting in 1961 and continued to work there until 1969. In 1971, Buck was teamed with the announcer Jim Woods and the following year; Mike Shannon joined Buck’s booth.

Besides his work on baseball broadcasting, Jack Buck was also working on football broadcasts. In 1964, he began working on National Football League games for CBS television. The following year he began working for the American Football League on ABC. He called regional NFL games until 1974, as well as several NFC Championship and Super Bowl games. In 1975 he left his duties with Cardinals to host the NBC pregame show GrandStand. In 1976, he called his first international NFL game which was held at the Korakuen Stadium in Tokyo, Japan.

From 1978 until 1984, Buck served as the voice of CBS Radio for Monday Night Football. He was also asked by ABC to become the Monday Night Football announcer but declined due to previous troubles with the network. For CBS, Buck called 17 Super Bowl games and many other playoff games.

During the 1990s, Jack Buck began to reduce his on-air time and called only the Cardinals home games. At the time, he was suffering from several health problems- Parkinson’s disease, diabetes, cataracts, vertigo, and sciatica. In 2001, Buck appeared at the Busch Memorial Stadium in St. Louis, the first night Major League Baseball resumed games after the 9/11 terrorist attacks. At the time he had lung cancer but managed to compose himself and hold his emotions, when he read a patriotic poem.