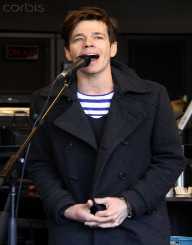 Nathaniel Joseph AKA Nate Ruess was born on February 26th, 1982. His place of birth was in Iowa City, United States. He is an American pop singer and a songwriter. He began his music career from the time he was in high school.

Ruess is popularly known as the guy that came up with the Format. This was in 2001 and that he did this with his colleague Sam Means. In 2003, the duo released their album called Inventions + Lullabies. Shortly after this, there was another album that he published while he was still working with the Format. This album was called Dog Problems.

In 2008, the group, Format separated, and Nate Ruess formed Fun. Two members that he recruited into the new group were Andrew Dost and Jack Antonoff. A year after establishing this team, their first album was out, Aim and Ignite. In 2011, they released Some Nights. This album was a major hit as it featured some of the great singles that were published in 2012, i.e., “Some Nights” and “We are Young.”

Nate Ruess is the son of Larry Ruess, his father, and Bess Zinger, his mother. He is the youngest sibling in the family of two. He has a sister named Elizabeth. His musical inspiration came from his uncle, John Ruess. His uncle was one of the best performers on Broadway.

Ruess suffered from pneumonia quickly while he was still young. It is as a result of this that his family had to shift to Glendale, Arizona. It is from this location that Ruess went to Deer Valley High School. He later graduated in 2000. While in high school, Ruess performed in school bands. Immediately after graduation, he decided to pursue his music career.


Rise to Stardom with Fun

The band, Fun was established in 2008. Ruess picked his two friends Jack Antonoff and Andrew Dost and formed this band. It took them a year before releasing their first album called Aim and Ignite. This album did not perform well, and the group had to pull up their socks.

Fortunately, after releasing their second album, Some Nights in 2011, they gained nationwide recognition. One of the songs that was a significant hit from the album was “We are Young.” This song was featured on the popular TV series Glee.

The single song still rose up higher on the chart ranks after being featured in one of the ads on Super Bowl 2012. During the same year, the group won the Grammies for best new artists.

In 2014, there were clear signs that the group was going to break up sooner or later. Early 2015, Fun posted on their website that the members of the team were going to pursue their projects. This meant that they would not be releasing any other Fun album.

Recently, Nate Ruess worked on releasing his solo album Grand Romantic in 2015. It is in the same year that Ruess appeared on The Voice as an advisor.