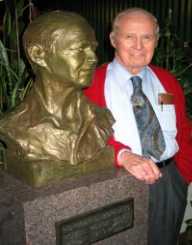 Father of the Green Revolution, Scientist

Countries like Pakistan and India will forever be grateful to Norman Borlaug for his excellent work he did to ensure food security in those countries. His contribution to worldwide initiatives in agricultural research and was enormous. Born Norman Ernest Borlaug on March 25, 1914, he was an American biologist and humanitarian. He is best known for his Green Revolution initiative. He also developed semi-dwarf varieties of wheat resistant to diseases and had high yields in Mexico as an agricultural researcher.

This initiative propelled Mexico to become a high exporter of wheat. The actions and others won him honors like the Nobel Peace Prize and Presidential Medal of Freedom. He was also a prominent figure in ensuring food security in the world especially the populated countries.

Norman Borlaug was born to Oliver and Clara Borlaug in Saude. He is the eldest child of four children. He had his first education at the one-teacher, one-room New Oregon #8 rural school in Howard County. He continued to the Cresco High School, where he was a member of the school sports team. Growing up, Borlaug was interested in agriculture and worked on the family’s farm.

With encouragement from his grandfather, Borlaug resolved to further his education to achieve greater heights in the foreseeable future. Though Borlaug failed his entrance exams at the University of Minnesota, he got admission at their newly established General College in 1933. There he was involved in several sporting activities and joined the wrestling team, which reached the Big Ten semifinals. He got a transfer to the College of Agriculture, forestry program after two quarters.

In between his education, Borlaug took some job to enable him to pay his fees. Some of the organizations he worked with include Civilian Conservation Corps in 1935 and the United States Forest Service in 1938. In 1940, he enrolled at the University of Minnesota to pursue a master of science degree and in 1942, a Ph.D. in plant pathology and genetics.

Norman Borlaug’s first job was in 1942 with DuPont in Wilmington, Delaware as a microbiologist. During the attack on Pearl Harbor by the Japanese in 1941, Borlaug and his colleagues were tasked to develop glue which could withstand warm salt water. They were able to deliver on the task and further worked on DDT for malaria control, camouflage and canteen disinfectants.

Borlaug during his time at DuPont was engaged by Dr. Jacob George to head the Cooperative Wheat Research and Production Program in Mexico aimed at boosting Mexico’s agricultural potential an offer he rejected to complete his engagement with DuPont. He later took the position as the head geneticist and plant pathologist in 1944. There he bred disease resistant and high yielding semi-dwarf wheat. He was also able to produce other varieties which did well in different locations, an initiative which was resisted by Dr. Harr at the start.

Borlaug aimed to avert foreseeable famine and also enhance wheat production in India and Pakistan, exported some of the researched seeds into those countries. The effort was met with several challenges like a delay at the port and funding, but the results were tremendous. The states enjoyed better yields which encourage them to import more of the seeds. The initiative was later dubbed the Green Revolution.

Norman Borlaug worked on the program till 1979 when he officially retired. Two years later he co-founded the World Cultural Council. He came out of retirement to teach and conduct research at the Texas A & M University.

He worked in Africa and researched into suitable seeds though it was met with fierce oppositions. Critics were of the view that crossed seeds, and inorganic fertilizers were not to be extended to Africa. He has been an active advocate for GeneticallyModified Organisms (GMO). He believes that to ensure food security, GMO is the only way to go.

Norman Borlaug has authored and co-authored books like, Wheat in the Third World, 1982, Land use, food, energy and recreation, 1983, Feeding a human population that increasingly crowds a fragile planet, 1994 and Norman Borlaug on World Hunger, 1997. Others include The Green Revolution Revisited and the Road Ahead, 2000, Ending World Hunger, The Promise of Biotechnology and the Threat of Antiscience Zealotry, 2000, Feeding a World of 10 Billion People: The TVA/IFDC Legacy, International Fertilizer Development Center, 2003 and several others.

Norman Borlaug has received several awards for his works some of which are Nobel Peace Prize in 1970 for his Green Revolution initiative, S. Roger Horchow Award for Greatest Public Service by a Private Citizen by Jefferson Awards in 1980 and Congressional Gold Medal and Presidential Medal of Freedom.

Others are, in 1968 Norman was named after a street in Ciudad Obregon by the people for his research works there. That same year he was inducted into the US National Academy of Sciences. He was also awarded an honorary doctorate by the Agricultural University of Norway, Peace Medal by Haryana Agricultural University and elected as a member of the Hungarian Academy of Sciences in 1980.\

Norman Borlaug was inducted into the National Agricultural Hall of Fame at the national center in 1984. Borlaug was conferred the title Distinguished Professor of International Agriculture and the holder of the Eugene Butler Endowed Chair in Agricultural Biotechnology by the Texas A&M University. He has received several honorary awards from Universities and other recognitions from countries like India for his Green Revolution.

Norman Borlaug was married to Margaret Borlaug. The two met at a coffee shop at the University of Dinkytown. The coupled were blessed with three children, one deceased. Surviving children are Norma Jean and William. Margaret died on March 8, 2007, after a fall. Borlaug died at age 95 on September 12, 2009, of Lymphoma. His children with a statement after his death urged the world to be inspired by Borlaug’s life to end humanitarian crises. Several world leaders paid tribute to a life well-lived.