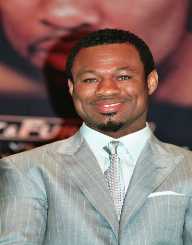 Shane Mosley better known in the arena as Sugar Shane Mosley is a former American boxer. Born on September 7, 1971, won four world titles in three different weight divisions including the IBF lightweight, WBA (Super), WBC welterweight and the WBA (Super), WBC, and Ring magazine light middleweight titles. Shane Mosley whose boxing career spanned from 1993 to 2016 was also a two-time lineal champion at the welterweight division and light middleweight champion. Mosley was named Fighter of the Year by the Boxing Writers Association in 1998 and by the International Boxing Hall of Fame in 2000.

Mosley was born on September 7, 1971, in Lynwood, California to Jack Mosley and Clemmie Mosley. He has two older siblings Venus and Cerena. As a young chap, Mosley gained interest in boxing and never looked backed since.

Mosley started as an amateur boxer with an impeccable record and winning various titles. He was the United States Amateur Champion, lightweight division in 1989 and 1990 and that same year became World Junior Championship silver medallist. Mosley won a bronze medal in the Goodwill Games in Seattle, 1990 and became the United States Amateur Champion at the light welterweight division in 1992

Mosley made a professional boxing debut on February 11, 1993, at the age of 21. It was scheduled six round bout against Greg Puente, whom he knocked outin the fifth round at the Hollywood Palladium in Hollywood, California. The same year, he fought six other bouts, winning all within the distance. The following year, he fought nine bouts, winning all including with Oscar Lopez, which traveled 10 round. Mosley was in a knocked spree in 1995 as he knocked out Raul Hernandez in round 2 and Mauricio Aceves in round 4. He maintained an unbeaten record as of May 1997, winning 23 bouts of which 22 were inside the distance.

Mosley’ world title debut was on August 2, 1997, with the undefeated and title holder Philip Holiday in an IBF Lightweight Championship at the Mohegan Sun Casino in Uncasville, Connecticut. It was Holiday’s seventh defense of his title after winning it in 1995. The bout was Mosley’s first 12 rounds fight. Mosley won by unanimous decision with the three judges scoring 116-113, 117-111 and 115-114 in his favor.

As the new IBF lightweight champion, he made his first title defense on November 25, 1997, against Mexican Manuel Gomez at the County Coliseum in El Paso, Texas. He retained the title by knocking out Gomez out in the 11th round. He successfully defended the title against boxers like Demetrio Ceballos, former world super featherweight champion John John Molina, Wilfredo Ruiz, and Eduardo Bartolome Morales all through knock out. Mosley was yet to meet his toughest oppositions, and that bout was against Jesse James Leija and later Golden Johnson. The fight against Leija was on November 14, 1998, at the Foxwoods Resort in Mashantucket, Connecticut. Mosley knocked Leija out in the 6, 7 and 9th round to retain the title. Two months later in January 1999, he defended it against Golden Johnson at the Civic Centre in Pensacola, Florida. Mosley retained the title by knocking him down. His last defense was against former USBA super featherweight champion, John Brown on April 17, 1999, at the Fantasy Springs Casino in Indio, California. Mosley won on a technical knockout (TKO) to retain the title.

After successfully defending his title, Mosley decided to move up two weight divisions to fight in the welterweight. He continued with his winning ways knocking out Wilfredo Rivera and Willy Wise. His next big bout was against Oscar De La Hoya. The fight against De La Hoya was for the WBC, IBA and the lineal welterweight titles on June 17, 2000, at the Staples Center in Los Angeles. The fight traveled to the 12 rounds with Mosley winning by a split decision. He earned $15 million of the purse with De La Hoya receiving $35 million. Mosley went ahead to defend the title against Antonio Diaz and Shannan Taylor all through knockouts. Mosley also defeated IBO World super welterweight champion Adrian Stone in a round3 knockout.

Mosley received his first professional career defeat in a fight against Vernon Forrest in the defense of WBC and Lineal welterweight titles at the Madison Square Garden Theatre on January 26, 2002. Mosley went down twice and continued to lose the match in a unanimous decision. The judges scored 115-110, 117-108, and 118-108 all in favor of Forrest.

The two met in a rematch on July 20, 2002, at the Conseco Fieldhouse in Indianapolis. The fight traveled the full distance, and again Forest won in a unanimous decision 117-111, 116-112, 115-113). Mosely and Dela Hoya met again on September 13, 2013, for De La Hoya’s The Ring, WBC, WBA and lineal light middleweight championship. The match went into the 12 rounds with Mosley winning in the controversial unanimous decision.

Mosley failed to defend his unified WBC, WBA Super, and The Ring Magazine world light middleweight titles against IBF champion Ronald Wright on March 13, 2004. Wright won the fight in a unanimous decision. Wright won again in a rematch on November 20, 2004, at the Mandalay Bay Resort & Casino. His other famous fights were against the likes of Fernando Vargas, Lus Collazo, Miguel Cotto, Ricardo Mayorga, Antonio Margarito, and Floyd Mayweather. Others include Manny Pacquiao, Saul Alvarez, Pablo Cesar Cano, and Anthony Mundine. He fought in weight divisions including lightweight, light middleweight, welterweight, and middleweight.

Mosley retired announced his retirement from boxing on August 16, 2017. This was after 24 years as a professional boxer. In an interview with ESPN, he said, "What happened was my arm is breaking down, my knees, shoulders. My back is starting to break down. My body is telling me I’m older and I can’t do it at 100 percent. I can’t see myself fighting again. I’d have to say I’m retired."

Mosley married Jin Sheehan in November 2002. The couple had three children before divorcing in 2010. Mosley had a son Shane Mosley, Jr., from his previous marriage. Mosley Jr. is a boxer and made a professional debut in 2014.