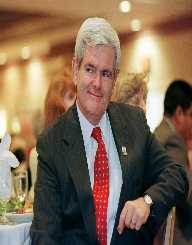 Newton Leroy Gingrich was born on June 17, 1943, in Harrisburg, Pennsylvania, USA. His parents were Kathleen Daugherty and Newton McPherson. However, his parents divorced when he was still a child. His mother later married Robert Gingrich. Robert adopted Newt and then changed his last name to match his. Newt Gingrich also has four half-siblings: Candace, Randy, Roberta, and Susan.

As a youth, Newt Gingrich moved around often, as his stepfather was in the military. Even with his many changes in education, he still managed to graduate from Baker High School.

After earning his degree, Newt Gingrich spent a short time working as an assistant professor at West Georgia College.

Newt Gingrich first began his political career in the early 1970’s when he took on the role of the Southern Region Director for Nelson Rockefeller’s presidential campaign. However, Rockefeller did not win the presidency.

In 1974, Newt Gingrich launched his first campaign to become a Republican member of  Congress. He did not win the election and ran again two years later losing again. It wasn’t until his third try, in 1978, that he was finally elected to the Congress. He would then remain a member of Congress for ten more terms.

It was while as a member of Congress, in 1983,  that she helped to form the Conservative Opportunity Society. Later on, in the same decade, he worked against Jim Wright (former Speaker of the House) because Wright was accused of breaking the campaign financing rules.

In the 1990’s, Gingrich’s career took a new lead. In the mid-1990’s, Newt Gingrich was elected as Speaker of the House. During his early years as Speaker, he worked against President Bill Clinton, who was elected in 1993. Once Clinton was president, he also encouraged him to sign the Welfare Reform Act.

However, in the late 1990’s, Gingrich’s popularity began to waver. It was in part because of his refusal to compromise with President Clinton on federal budget cuts that there was a government shutdown in 1995. In 1997, he was re-elected as Speaker of the House, but because of previous scandals involving taken tax-exempt donations used for his own purposes, he had to pay a fine. It was only a year later that Newt Gingrich resigned as Speaker of the House. A year later, he also resigned from Congress.

In the 2000’s, Newt Gingrich remained involved with politics, in an informal sense. For a while, he worked with Fox News and a consultant.

In 2012, Newt Gingrich ran to become the Republican candidate for the United States presidency. One of his most famous promises was to put a permanent base on the moon, make the country’s budget more conservative, and making the country more independent on fuel production. However, he lost the bid to Mitt Romney, in part because his campaign was unorganized, as he did not manage his campaign finances well. However, it was later the Democratic bid, who later won the presidency: Barack Obama.

Most recently, Newt Gingrich has proven to be a Trump supporter. He encouraged other Republicans also to support Trump. For a short time, he wanted to be Trump’s running mate, but he eventually lost the vice-presidency to Mike Pence. However, Trump promised Gingrich a role in his administration. However, this did not happen.

Over his long career, Gingrich has also published several books. Some of his most popular books and series are listed below.