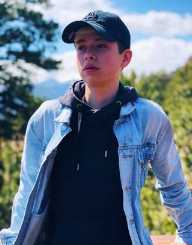 Jake Warden was born on February 20, 2002, in Denver Colorado, United States. He is an American You Tuber and Vlogger. He loves posting videos online that consist of mainstream topics and discussions like tutorials that have been made up. He also loves posting lip dub videos on Musical.ly where he has many followers. His videos are usually comical and humorous. He is only fifteen years old, and he has already made it as a YouTube Star. He is a funny character who loves making his audience happy in every way possible. He still attends high school while he posts videos online.

Jake Warden created a YouTube channel in 2013 though he did not post any video on the channel until 2014. He started by posting videos of makeup tutorials for boys. He also posted DIY videos for Halloween Costumes. The videos he posted at first did not garner much popularity, but he became famous when he lip dubbed Ariana Grande and Demi Lovato’s songs. He captured the attention of many people because of the creativity that he possessed.

Jake Warden is one of a kind as he brings comedy to his videos hence making them fascinating to watch. He is also famous for his lip-synching skills in ‘Keeping Up with the Kardashians Parody.’ His popular video is known as ‘Prank Calling in Sick from Jobs I Don’t Have’ which has more than one million views on YouTube. His videos on makeup tutorials for boys are popular, and many young boys and youths view them.

Jake Warden has also posted a number of DIY tutorials that have been received well by the public. He is a force to be reckoned with as he is not giving up on his dream of becoming a prominent and influential YouTube Star. He is usually accompanied by his friends Jessica, Emily and Stevie. His videos are so much fun to watch. He has more than two hundred and fifty thousand subscribers on YouTube.

Jake Warden is determined to achieve greatness as he is a young rising YouTube Star. He is hardworking and optimistic about what he wants in life. He is also funny and very good looking. He posts and makes videos that are meant to make his fans happy at all times. He is charming and jovial, and both these qualities are even seen from his appearance. He loves his family and friends very much that he includes them in his videos from time to time. He is also into challenges, and so he performs them and then posts them on his YouTube Channel. He has presented several challenges such as Onesie Acrobatic challenge, condom challenge and the Bean Boozled challenge among many other challenges.

Jake Warden is popular with a broad fan base, but he still manages to live a simple life like any other ordinary teenager. His favourite You Tuber is Joey Graceffa whom he admires and who acts as his role model. His favourite singers include Ariana Grande, Trevor Moran, and Shawn Mendes. He also loves the band One Direction. Jake is a very charming person with an appealing personality. He enjoys exercising to keep fit. He also eats healthy meals to ensure that he stays fit and healthy. He has been accused of being homophobic, but he has replied to people’s comments by stating that people should respect other people’s choices free from any sort of judgment.

Jake Warden still attends High School though he does not love sports and he would rather stay home than go to school and involve himself in sporty activities. He loves shopping and this he can do almost five times in a week. He enjoys experimenting with his hair as he colours his hair differently every chance that he gets. In 2016, he appeared in an episode of ‘Comedy Central.’