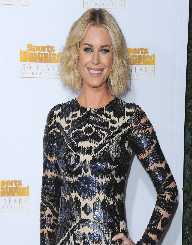 American actress Rebecca Romijn was born on the 6 November 1972 in California to Elizabeth Kuizenga and Jaap Romijn. She is of Dutch and English ancestry.

After graduating from high school, Rebecca Romijn enrolled at the University of California in Santa Cruz (1990-1991)

She worked as a model in the early 1990s and appeared in Sports Illustrated and became Victoria’s Secret model.