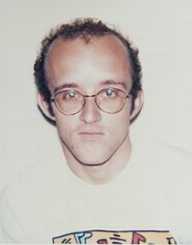 One of the most influential and thought-provoking artists of our time was Keith Haring. His unique style and message remains as relevant today, years after his death, as when he created his works of art.

Born on May 4, 1958, in Reading, Pennsylvania, Keith Haring was the oldest of four children. He was raised by his mother, Joan, and father Allen, along with his three sisters, Kay, Karen, and Kristen in Kutztown, not far from his birthplace.

His father, Allen, was a significant influence on Keith as a child. He was an engineer and amateur cartoonist who produced original drawings for his son to enjoy from a very early age.

Keith Haring. was raised in a religious Christian family, but he eventually left his religious background behind. Haring experimented with drugs while hitchhiking across the United States, selling Grateful Dead and anti-Nixon T-shirts he made.

Keith Haring. began studying commercial art in 1976 at Pittsburgh’ Ivy School of Professional Art, but he quickly lost interest and dropped out after two semesters. His decision to leave the school was inspired by the writings of Robert Henri in The Art Spirit which did his favor concentrating on his art.

In 1978 he continued his education in New York at the School of Visual Arts.

The drawings, paintings, and sculptures created by Keith Haring demonstrated significant political and personal forces. Much of his work was also the production of ideas about his sexual orientation.

Haring had an opportunity to view and become inspired by the works of many different artists through his maintenance job at the Pittsburgh Center for the Arts.

In 1977, Keith Haring became more confident in creating larger works through inspiration he received from the art of Pierre Alechinsky. Soon after, the sculptures of Christo helped to influence him to give his work more public involvement.

1978 marked Haring’s first exhibition, which took place in Pittsburgh, at the Center for the Arts. Soon after, he moved to New York and got a job as a busboy at a nightclub while attending the School of Visual Arts to study painting.

Keith Haring, first received attention with his public art in the subways of New York, thinking of the open spaces of black paper paneling as the laboratory for his work.

In 1980, he organized exhibitions at Club 57 and in that same year, at a Times Square Exhibition, he drew animals and human faces for the first time. His art became noticed citywide as he created provocative collages throughout the city made up of New York Post headlines.

Between 1982 and 1989, his art became global. His efforts took him to many countries, as he created dozens of work for public display, from Rio De Janeiro to Paris, Minneapolis, and New York. Many of his works were done for charitable purposes, adorning the walls of hospitals and orphanages.

By that time, Haring was very well known and accomplished as an activist and artist. His work was influential in befriending Andy Warhol, as some of his pieces were themed around the famous fellow artist. His friendship with Warhol was a springboard to his notable success.

In 1989, Keith Haring criticized the avoidance of social issues. One major problem at the time was AIDS, and he spoke on the matter through a piece called "Rebel with Many Causes" that revolved around a theme of "hear no evil, see no evil, speak no evil." His political voice rang out years earlier in 1985, however, when he designed a Free South Africa poster to raise awareness of Apartheid. Other issues he created pop art pieces for included Coca-Cola, Lucky Strike cigarettes, and Absolut Vodka. His Crack is Whack mural in New York was a statement on the crack cocaine epidemic.

During the spring of 1986, Haring had his first solo museum exhibition at the Stedelijk Museum in Amsterdam. Later that year, he was asked to create a mural on the Berlin Wall by the Checkpoint Charlie Museum in Germany. The piece he created was 300 meters in length and symbolized the hope of unity between East and West Germany.

His love of working with children led to his CityKids Speak on Liberty project. About 1,000 children collaborated on the project in celebration of the Statue of Liberty’s one-hundredth year.

At the same time, Keith Haring opened Pop Shop in Soho to make his work commercially accessible to the public. The shop featured his art on shirts, posters, buttons, and toys.

Haring continued to achieve exhibitions around the globe. Meanwhile, he developed a relationship with the pop singer, Madonna and designed album cover artwork for her. In 1988, Haring was among a select group of artists to have their work appear on a label of Chateau Mouton Rothschild wine.

In June of 1989, several months before Keith Haring's death, he painted the last public work of his life. It was titled "Tuttomondo," which is Italian meaning “All World.” It is displayed on the rear wall of the convent of the Church of Sant'Antonio in Pisa.

Life Beyond the Art

Keith Haring, an openly gay man, was a strong advocate of safe sex. In 1988, however, he was diagnosed with AIDS.

From 1982 to 1989 he used his imagery during the last years of his life to speak about the illness he would eventually be exposed to and generate activism and awareness about AIDS.

In 1989, the Keith Haring Foundation was established with his hard work and dedication, to provide funding and imagery to AIDS organizations and children's programs. His goal was also to expand the audience for his work, provide grants and funding to non-profit organizations that target educating disadvantaged youths and informing individuals about HIV and AIDS. The foundation also supports arts and educational institutions by funding exhibitions, educational programs, and publications. Haring’s legacy is carried on by the foundation through research and sharing of his works.

Keith Haring work transcended canvas, walls, and sculpture. He collaborated with singer Grace Jones to display his unique abilities. He painted Jones’ body in graffiti for two of her live shows. Haring also had his influence on jewelry, working with designer David Spada to create pieces for Jones. His work extended into the fashion world as he worked with fashion designers Vivienne Westwood and Malcolm McLaren on a collection worn most notably by Madonna during some of her television performances.

Keith Haring passed away on February 16, 1990, in New York City of an AIDS-related illness.

As a celebration of his life, Madonna’s first New York date of her Blond Ambition World Tour became a benefit concert in Haring’s memory. She donated all proceeds from her ticket sales to AIDS charities in his name.

The art of Keith Haring is on display at exhibitions and collections of major museums throughout the world.