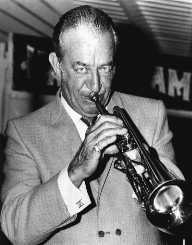 Harry James was an American trumpet player and bandleader.

Harry Haag James was born in the city of Albany, Georgia, on March 15, 1916. His father, Everett, was a bandleader in the Mighty Haag Circus. His mother, Myrtle, was an acrobat. He learned how to play the trumpet and the drums at a young age. By the age of twelve, he started leading one of the bands in the circus.

Harry James began playing in local bands when he was fifteen years old. During the performance with the band of Herman Waldman, he was spotted by the popular musician Ben Pollack.

He joined his band in 1935. Harry James left almost two years later and he joined Benny Goodman’s orchestra. He was the primary trumpet player in the group. He had memorable solos on songs such as “One O’clock Jump” and “Sing, Sing, Sing”. He was known for his bold and loud style which was influenced by his childhood in the circus.

In 1939, James formed his own big band. The legendary singer Frank Sinatra was the vocalist. He left after seven months. Overall, the band did not achieve much success in the beginning. That finally changed in 1941, when the songs finally started becoming hits.

They included “You Made Me Love You”, “Music Makers”, and plenty of others. James decided to change the style of the music to commercial pop instead of classical jazz. That decision paid off.

The band became so popular, that at one point, Columbia could not print enough records to satisfy the demand. The band stopped performing during World War II. They continued to tour when the war ended. They also appeared on different radio programs, including Call for Music.

In the 1950s, Harry James decided to return to his jazz roots. He left Columbia and he signed with Capitol Records. He continued to tour throughout the United States. He also had some performances in foreign countries, including the United Kingdom. He booked many gigs in the casinos and hotels in Las Vegas.

Overall, Harry James released 30 studio albums, 47 EPs, many compilations, and a few live albums. He frequently collaborated with other musicians. He released more than 200 singles. Many of them managed to reach the charts in the pop, jazz, and R&B categories.

Harry James appeared in more than a dozen films. He played himself, performing together with his band. His first such film was Hollywood Hotel, released in 1937. The last one was The Ladies Man, released in 1961.

Apart from the films where he appeared as himself, he also had a few brief acting roles. He acted in films such as Do You Love Me and The Sting II. His music was featured in additional films and television shows.

Harry James was diagnosed with lymphatic cancer. He died on July 5, 1983, in Las Vegas. Sinatra gave the eulogy at his funeral.

Two of Harry James’ works ended up in the Grammy Hall of Fame. The first one was his jazz album Trumpet Blues and Cantabile. The second one was the pop single You Made Me Love You. In 1960, he got his own star at the Hollywood Walk of Fame. In 1983, he was inducted into the Jazz Hall of Fame.