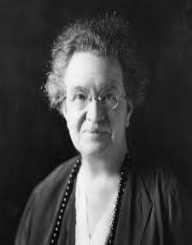 Florence Sabin was born on November 9, 1871. She was an American scientist. She specialized in medical science. She was the first woman ever to hold a full professorship at the John Hopkins School of Medicine. She was the first woman as well to be elected to the National Academy of Sciences. At a point in her lifetime, she became the head of the Rockefeller Institute of Medical Research. She died on October 3, 1953, at the age of eighty one.

Florence R. Sabin was born on November 9, 1871, in Central City in Colorado in the United States of America. She was born to Serena Miner and George K. Sabin who was a mining engineer. At the age of seven, she lost her mother to puerperal fever. She was brought up alongside her sister Mary. She and her sister were later brought up by their uncle in Chicago. Later on, they were raised by their grandparents in Vermont.

She attended Smith College where she graduated from with a Bachelor’s Degree in 1893. She later joined the Johns Hopkins University School of Medicine. She was among the fourteen females in the class at that moment. While at the university she involved herself in two projects that shaped her career with the help of Franklin P. Mall. She was an observant and dedicated student while in school.

The first project that Florence Sabin undertook was that of producing a three dimensional model of an infant’s brain stem. The research became the focus of the textbook ‘An Atlas of the Medulla and Midbrain’ which was published in 1901. Her second project involved research on the embryological development of the lymphatic system which led to the findings that an embryo’s lymphatic system is formed from blood vessels and no other vessels.

She graduated from the university, Florence became an intern at the Johns Hopkins Hospital under the guidance of Sir William Osler who was a physician. After one year of interning, she got a fellowship in the Department of Anatomy at Johns Hopkins School of Medicine. In due course, there was established a Department of Anatomy at the Johns Hopkins School of Medicine for her. In 1902, she started teaching at the newly formed department. Three years later, she was appointed as an associate professor.

In 1917, Florence Sabin became a full professor of embryology and histology at the school. She was the first woman to become a full professor at a medical school. In 1921, she became the first woman president of the American Association of Anatomists. In 1924, she resumed her research on blood vessels, the histology of the brain and the pathology and immunology of tuberculosis. In the same year, she was made a member of the National Academy of Science. One year later, she was appointed as head of the Department of Cellular Studies at the Rockefeller Institute for Medical Research, New York. In 1926, she became part of the research committee of the National Tuberculosis Association.

In 1944, she came out of retirement to become the chair of a subcommittee on health on the request of John Vivian, the then Colorado Governor. Florence researched the health benefits of the public and the state. All health bills she supported even though she faced much opposition from some politicians. In 1948, she was appointed the manager of health and charities for Denver. She was generous enough to give out her salary for medical research. In 1951, she retired finally from active duty; however, she continued to write and voice her opinions on public health.