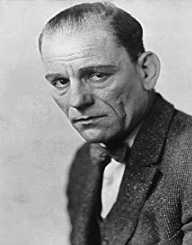 Leonidas Frank Chaney was born 1st April 1883, to Frank and Emma Chaney. He was born in Colorado Springs, Colorado, in the United States. His parents were both deaf. As a result, Chaney was a talented pantomime performer from a young age.

In 1902, Chaney launched his career on stage. He regularly traveled to perform in Vaudeville shows and theater productions as well.

Chaney met a fellow performer, Cleva Creighton, and married her in 1905. A year later their son was born. He was named Creighton, but later became known as Lon Chaney Jr.

The family continued to tour and perform, but in 1910 they settled in California.

By 1913 the marriage was in trouble. Cleva swallowed mercuric chloride to commit suicide but failed in her attempt. The couple divorced amid the scandal. As a result, Chaney had to leave the theater and start a career in film.

Between 1912 and 1917, Universal Studios contracted Chaney. He had great skill in applying his makeup. Due to this he won many roles and had a distinct advantage over the other actors.

He also became good friends with Joe De Grasse and Ida May Park. They were a married couple, and both were directors. The relationship helped him further with winning roles.

Chaney became an important actor at the studio. In contrast, his salary remained much lower than it should have been. He asked for a pay raise but to no avail. The studio valued him at no more than $100 per week.

Chaney left the studio and for the next 12 months had difficulty finding acting roles. In 1918, however, he played a starring role in the movie Riddle Gawne. At last, he was taken seriously as an actor.

Throughout the 1920s, makeup in movies was in its infancy, and makeup departments did not exist. Chaney applied makeup with great skill, which gave him a distinct advantage over the other actors.

Chaney acted in many movies for Metro-Goldwyn-Mayer. During the last five years of his career, he worked for them exclusively.

Chaney led a very private life with his second wife. They stayed away from the social scene of Hollywood.

In 1929, Chaney developed pneumonia while on location filming. The illness took hold rapidly, and Chaney died on 26th August 1930.

Sadly, around 100 of his movie appearances disappeared.

Chaney was awarded a star on the Hollywood Walk of Fame.

In 1915, Chaney married for a second time. His new wife was Hazel Hastings, and they were still together at the time of death.

After their marriage, the couple gained custody of Chaney's son, Creighton. Creighton had been living in several homes and boarding schools since Chaney divorced Cleva.

Creighton later changed his name to Lon Chaney Jr. He became a film actor like his father.