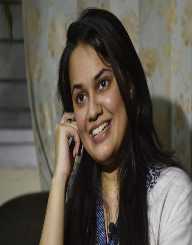 Vine is a social media platform on which users can post short videos, usually six seconds each, online. These videos could be shared with friends on other social media sites. While many people who make videos strive to have their work be longer than six seconds long, Viners know how to make every second count, and Tina Woods knew how to do just that.

Tina Woods posted her first Vine video in October 2013 under the account name Too Turnt Tina. It was not until the beginning of 2014 that Tina Woods began to be extremely popular on the app, having more than a million followers.

Tina likes to post videos of the average life of a teenager in high school. Her videos usually have a comical vibe to them. Many teenagers who watch her videos love being able to relate to her life. However, the Vine app is rumored to be shutting down soon, so Tina Woods will need to find a new career.

Aside from Vine, Tina Woods also has a high follower count on both YouTube and YouNow. Her YouTube account sports more over 500,000 followers. On her YouTube channel, she posts longer videos of herself. She has a series of video blogs, fashion advice videos, and other various “how to do” videos. On her YouNow channel, a live video sharing site, she has over 250,000 followers.

Tina Woods is well known in the social media community. Her hundreds of thousands of followers make it hard for her to go unnoticed. In her short career, she has already been sponsored by some big name brands. In her videos, she has shown off merchandise from Disney, VANS, and much more.

Tina Woods talks about fashion frequently in her videos, showing her passion for it. In 2014, she designed and released her fashion line. These fashion clothes were sold on eLUXE. They were only sold for a limited time, which could make her designs more valuable in the future.

Tina Woods was nominated for the Shorty Awards (an award show that rewards the best of the best in social media) in 2016 for YouNower of the Year. However, she did not win.

Tina Woods aspires to become an actress one day. She may also release another clothing line. Like most teenagers, she is most curious about what her future might bring her. For the near future, Tina wants to continue making her videos and survive high school. After that, the future is anything she makes out of it (and then records).