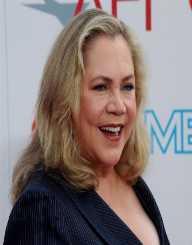 Kathleen Turner was born on June 19, 1954, in Springfield, Missouri, USA. Her parents are Patsy and Allen Turner. Allen was a diplomat, and because of this, the Turner family moved around often. Kathleen Turner, in turn, attended many schools and traveled all around the world while she was still young.

The last high school Kathleen Turner attended was the American School, in London, England. She graduated from this school in 1972.

After high school, Turner moved to the United States. There, she first studied at Missouri State University. Kathleen Turner stayed there for two years before transferring to the University of Maryland, where she studied theater. She stayed there until she graduated with a bachelor’s degree in 1977. Also during college, she appeared in several stage plays.

After graduating from college, Kathleen Turner moved to New York to perform on Broadway. She did this for a few years before being cast in her first moved called Body Heat in 1981. She played a sexy but sly woman involved in a murder plot.

While the studios wanted Turner to continue to play sexy women, she did not want to be typecast. Instead, throughout the 1980’s, she acted in a variety of roles from the comedic, romance, to dramas. Some of her films from the 1980’s are listed below.

In the 1990’s, Kathleen Turner was diagnosed with arthritis. This limited some roles she was able to take on. It was also around this time that she began drinking heavily, which also made it harder to find work. In the early part of the 1990’s, she did have some leading roles, but by the late 1990’s she mostly worked as side characters. Some of her films from the 1990’s are listed below.

In the 2000’s, Kathleen Turner’s career took another turn. She began spending more of her time working on television shows (as guest characters). She still worked on some movies, but not many. Some of the shows she worked on during this time are listed below.

The 2010’s have brought even more changes to Turner’s career. Kathleen Turner has resumed acting both on the stage and in films. As of 2017, she continues to act.

Kathleen Turner published an autobiography in 2008 called Send Yourself Roses: Thoughts on My Love, Life, and Leading Roles.

Over the course of Kathleen Turner’s long career, she has won a dozen awards and has been nominated for several dozen others. Some of her most impressive awards are listed below.

Kathleen Turner married Jay Weiss in 1984. This couple has one daughter together: Rachel. This couple remained married until 2007 when their marriage ended in divorce.