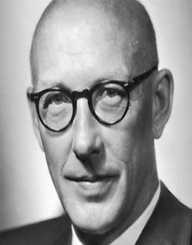 Edward Tatum was born on December 14, 1909, in Boulder, Colorado, United States. He was an American geneticist and biochemist who won the 1958 Nobel Prize in Medicine alongside George Wells Beadle. Their research showed that genes played an important role in controlling individual steps in metabolism.

Together with Beadle, they established the ‘one gene-one enzyme theory’ when they experimented by exposing the Neurospora crassa to x-rays, which caused mutations. After years at Stanford, he left for Yale University and served as an assistant professor in botany. He worked alongside scientist Joshua Lederberg to identify the characteristics of various bacteria.

Consequently, their research showed that E-coli bacteria could pass genetic information through the process of recombination. He later returned to the University of Stanford and served as professor of Biology. He died on November 5, 1975.

Edward Lawrie Tatum was born to Professor Arthur Lawrie Tatum and Mabel Webb Tatum. He was born in Boulder, Colorado on December 14, 1909. His twin Elwood died at birth, and he was the first surviving son of his parents. With his father’s capacity as a professor, the family had to move from place to place since he instructed in many institutions.

Edward Tatum was fascinated with science from an early age and had a passion for it as well. He attended the University of Chicago in 1918 and graduated two years later. He enrolled at the University of Wisconsin–Madison from where he graduated with a BA in Chemistry in 1931 and M.S degree in microbiology in 1932. He later received his Ph.D. in biochemistry two years later in 1934 from the same institution.

Edward Tatum's very first post-graduate work was done in Holland in 1935 at the University of Utrecht. He researched on the factors that promoted growth in staphylococci; however, his work never bore much fruit. He continued with his research work in 1937 at Stanford University where he worked alongside his professor Beadle as a research associate. In 1941, they exposed Neurospora to X-ray to obtain mutants which would show biochemical defects due to lack of nutrition.

They ended up with several mutants which had nutritional deficiencies and furthered their research to sort them out. Their report later stated that the gene and enzyme properties were of the same order. Together with Beadle again, they recombined genes and enzymes via a direct link and established the hypothesis known as ‘one gene-one enzyme’ theory.

Edward Tatum was promoted to the position of Professor of Microbiology later in the latter institution. He began working on bacteria with Joshua Lederberg whom he had mentored. Their work showed that the Escherichia coli bacteria belonging to the K-12 strain could pass genetic information after entering a sexual phase. In 1948 he returned to serve as Professor in the Department of Biology at the University of Stanford and later took up the position as head of the Department of Biochemistry.

Edward Tatum received the Nobel Prize for Physiology or Medicine in 1958 alongside George Wells Beadle for their discovery that genes act by regulating definite chemical events. Joshua Lederberg also shared in the same prize while working with Edward on bacteria.

Edward Tatum married June Alton on June 28, 1934, and together had two daughters Margaret and Barbara. In 1956, they divorced and remarried Viola Kanter on December 16 the same year. Viola died on April 21, 1974. He married his third and last spouse Elsie Bergland later in 1974 with whom she lived until his demise. He was a habitual smoker and had developed chronic emphysema. He died on November 5, 1975, of heart failure in New York at the age of sixty-five.