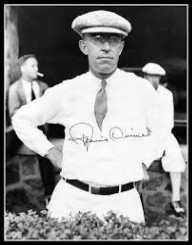 Francis Ouimet was an American golfer in the 1900s. He was born in Brookline, Massachusetts on May 8, 1893. He is famously known as the ‘Father of Amateur Golf.’

He was appointed to serve as Captain of the Royal and Ancient Golf Club of St Andrews. In 1974, He was inducted into the World Golf Hall Of Fame. Francis died on September 2, 1967.

Francis DeSales Ouimet was born on May 8, 1893, in Brookline, Massachusetts. He was the son of Arthur Ouimet and Mary Ellen Burke. He grew up in a rather low-income family set up, and their financial status was always below the economic ladder. Francis showed interest in golf from a young age and visited the Country Club frequently.

With the urge to know, he trained himself how to play golf with the help of a club, he got from his brother and the deserted golf balls he picked from the Country Club. Within a short time, he attracted the attention of most of the members of the club. He had improved his skills in golf and impressed the caddie master Dan MacNamara.

Francis Ouimet was first employed at a sporting goods store before he took entirely to golf. He was only twenty years old when he began playing active golf. In 1913, his hard work and determination bore him fruits at the Massachusetts Amateur when he won his first title.

He earned the title five times in a row before proceeding to the U.S Amateur. In September of the same year, he lost to Jerome Travers at the quarterfinals of the U.S Amateur in Long Island, New York.

Ouimet competed against the British golfers at the U.S Open Championship of 1913. It was fortunate for him since he had full knowledge of the course where the championship was scheduled. At the Country Club, Brookline, a large crowd gathered to cheer and follow the playoffs. His opponents were Vardon and Ray, and after an 18-hole playoff, he emerged victoriously. This win brought much praise making him the youngest golfer to ever play and win the U.S Open.

Francis Ouimet again won the U.S Amateur in 1914 and later taking the top in 1931. In 1951, he was appointed as the Captain of the Royal and Ancient Golf Club of St Andrews. He was the first non-Briton to have ever been elected as captain.

He also earned the Bob Jones Award in 1955 for his ideal sportsmanship in golf. He was also an inspiration to the legend Gene Sarazen who was named as one of the outstanding champions. His name is also engraved in one of the rooms at USGA museum.

A scholarship fund program named after him was begun in 1949 known as the Francis Ouimet Scholarship Fund. Most of its funds were meant to support upcoming caddies for clubs in Massachusetts.

Francis Ouimet has also been named in many golf halls of fame including being inducted into the World Golf Hall of Fame in 1974. His portrait was engraved on a 1988 United States Postal Service postage stamp to commemorate him. Mark Frost published a biography in 2002 titled ‘The Greatest Game Ever Played: Harry Vardon, Francis Ouimet and the Birth of Modern Golf.’

The book was later adapted into a film ‘The Greatest Game Ever Played’ which was aired in 2005. A statue was erected in Brookline, Massachusetts and St Augustine World Golf Hall of Fame based in Florida. In Johannesburg, South Africa, a street at Greenside bears his name.

Francis Ouimet was enlisted in the U.S Army during the First World War. On September 11, 1918, he married his wife Stella M. Sullivan and together had two children, Barbara McLean, and Janice Salvi. He died on September 2, 1967, in Newton, Massachusetts at the prime age of seventy-four.