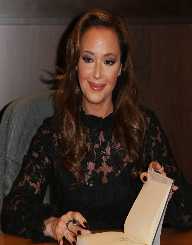 Leah Remini is an actress, producer. She became an Anti-Scientology activist since 2013.

Leah Marie Remini was born on 15 June 1970 in Brooklyn, New York City. Her father George Remini owned an asbestos removal company; her mother Vicki Marshall was a schoolteacher. Leah has an older sister Nicole and four half-sisters: Christine, Stephanie, Elizabeth, and Shannon. Shannon’s father, Dennis Ferrara was mother Vicki’s second husband; he was the person who turned the family to Scientology when Leah was eight.

When she was twelve, Leah was recruited into the Sea Org with older sister Nicole. Leah spent a year in Sea Org. The family lived in Clearwater, Florida for a year before moving to Los Angeles. Leah dropped out of school to pursue an acting career.

Leah Remini debuted in television show Head of the Class in 1988, and two episodes of Who’s the Boss. She managed to land in support roles until 1998. Leah starred as Carrie Heffernan on The King of Queens; the series ran for nine seasons. Leah’s fame in television landed her a movie role in Old School during 2003. After the series ended, Leah returned to acting in a few supporting characters. She also produced and starred in Family Tools, but the show was canceled a few months after due to low ratings.

Since 2014, Leah Remini and her family are featured in reality television series Leah Remini: It’s All Relative, highlighting her normal life despite celebrity status. Leah also produced an eight-episode series, Leah Remini: Scientology and the Aftermath. The show was aimed to shed light on ex- Scientology member’s experience in the Church, focusing on interviews with other members.

Leah Remini returned to acting in 2017, starring in What about Barb. She would also be performing alongside Kevin James in the final season of Kevin Can Wait. Leah also briefly appeared on the Talk, but her contract was not renewed.

Leah Remini married Angelo Pagán on July 19, 2003. Their daughter, Sofia, was born on 16 June 2004. Angelo has three sons from a previous marriage.