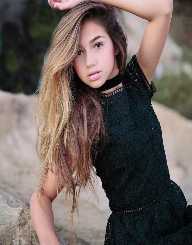 Khia Lopez was born on August 29, 2004, in California, USA. Her mother is Tiffany Palladine, and her father is James Lopez. She also has three siblings, which are two brothers and a sister. Her brother's names are Kash and Jett. However, her sister’s name is kept private by the family, since she is so young.

Khia Lopez has modeled every since she can remember. She first got into the business of modeling when she was only three years old. Since then, she has continued to model for various companies. Khia Lopez models for the following companies and groups: The Weekend Wardrobe, Rock Your Hair, Kidz Kandi, Little Trendsetter, and Kidz Fashion. For all of these fashion companies, she has modeled children and pre-teen’s clothing. One of the models that she has worked with in the past is Lily Kruk, Jenna Ortega, and Trista Pezsko. She is also friends with the preteen model Vandy Jaidenn. As she gets older, Khia hopes to continue modeling. As she gets older, her style is sure to grow!

Khia’s mother works in the fashion industry, which is one of the reasons why it was so easy for her to become involved with the fashion world at such a young age. One of the things her mother does is run the blog. We’re So Fancy. Every once in a while. Khia Lopez will post on this blog as a guest blogger. Other young models around her age also contribute to the blog.

One of the social media websites/apps that Khia Lopez is most popular on is Instagram. This is a picture and video sharing website/app. She first joined the website/app in 2014. She often posts pictures of herself modeling, dancing, or just spending time with her friends. One of her friends that she often posts pictures with is Trista Peszko. She currently has over 200,000 followers on this site. Her tag on this site is @khialopez.

Khia Lopez is famous in the music app, Musical.ly. This app is mostly used for singing and dancing. Khia’s talent of choice happens to be dancing! She has been taking dance classes for years, and her talent shows both in her videos and in her large amount of fans, which on this site alone, totals to over 500,000 fans. These fans and others have contributed millions of hearts (likes) to her videos.

Khia Lopez also has a fair number of followers on the popular video websites, YouTube. She first opened her account on this site in 2016. Since then, she has only posted four videos. Most of her videos are simply picture complications of various modeling jobs she has done.

However, her most popular video on the site is a hair tutorial video in which she teaches people how to do their hair in the same way that she does her own. Even though she does not have a lot of videos, her following is still impressive. Khia Lopez has over 40,000 views on her videos and over 2,000 subscribers to her channel, which is simply called Khia Lopez.