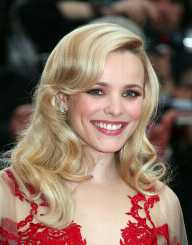 Canadian actress Rachel McAdams was born in London, Ontario, Canada on the 17 November 1978 to Sandra Gale and Lance McAdams. She was raised in St Thomas, Ontario and was one of three children born into a family of British and Irish descent. She developed an interest in acting at a young age and was also keen on sport.

Rachel McAdams was a student at Myrtle Street Public School and the Central Elgin Collegiate Institute. She then enrolled at York University to study drama, graduating with a B.A. honors degree (2001).

Rachel McAdams made her television debut with Shotgun Love Dolls (2001), an MTV pilot. Her film debut was in My Name is Tanino (2001). Then in 2002, she appeared in The Hot Chick alongside Rob Schneider and Anna Faris. Her next role was in Slings and Arrows, a Canadian comedy series. Her breakthrough role was in Mean Girls which also starred Lacey Chabert, Amanda Seyfried, and Lindsay Lohan.

Rachel McAdams starred as Allie Hamilton in The Notebook (2004), an award-winning adaptation of the Nicholas Sparks novel of the same name. Her next film, the romantic comedy Wedding Crashers (2005) which was another hit movie. Films since then include The Red Eye, The Family Stone, Married Life (2007), State of Play (2009), The Time Traveler’s Wife and Sherlock Holmes. Morning Glory (2010)

In 2016 Rachel McAdams was nominated for an Oscar for Best Performance in a Supporting Role for Spotlight (2015). She also won a Gemini Award in 2004 for Best Performance by an Actress in a Featured Supporting Role in a Dramatic Series for Slings and Arrows (2003). And in 2005 she won the Hollywood Breakthrough Award: Breakthrough Actress for Wedding Crashers (2005), The Family Stone (2005) and Red Eye (2005).