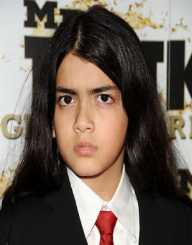 Prince Michael Jackson also known as “Bigi” and previously as Blanket is the youngest child of pop star Michael Jackson. Born on February 21, 2002, he earned the nickname “Blanket” from his father. However, after becoming a subject of bullying for the unusual nickname, he decided to change it to Bigi. Following the death of his father in 2009, Prince Jackson has mostly stayed out of public life.

Jackson II and his two siblings grew at Neverland Ranch. Growing up the siblings usually wore either vails or mask when appearing in public in their father’s bid to hide their identity from media and paparazzi.

Jackson II made his first television at a very young age. In 2003, he made his debut television appearance in the documentary, Living with Michael Jackson. He was the center of controversy in the German hotel balcony incident. While lodging at Hotel Adlon in Berlin, Germany for an upcoming show, Michael Jackson dangled Jackson II from the balcony of the hotel for the viewing of the numerous fans gathered outside to catch a glimpse of him. Michael subsequently apologized for the incident.

Jackson II was seven years when his father died in 2009. Following the death, he and his two siblings were placed in the custody of their grandmother, Katherine Jackson. However, Jackson II is currently under the guardianship of his older cousin T.J. Jackson. He attends a private school, Buckley School in Sherman Oaks, California. Since the death of his father, Prince Jackson hardly makes public appearances. His known public appearance was during his father’s funeral in 2009 alongside his siblings. In addition, he appeared with his sibling to receive their father’s posthumous Lifetime Achievement Award at the Grammy Awards in 2010.

Change from Blanket to Bigi

Jackson changed his father’s given moniker Blanket and adopted the name Bigi in 2015. According to reports, the name “Blanket” made him a victim of harassment for several years, resulting in the change.

According to Celebrity Net, Prince Jackson net worth is around $100 million as of June 2017. Reports suggest that Michael Jackson willed $33 million to each of his three sons.