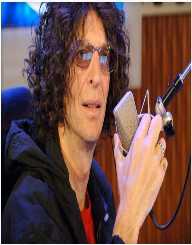 Howard Stern is a self- proclaimed King of Media, he is best known for his radio: The Howard Stern Show. Howard also dabbled in television, acting and other media.

Howard Allan Stern was born on January 12, 1954, in Jackson Heights, Queens in the New York City. His parents Bernard and Rae Stern were Jewish with Poland and Austria-Hungary ancestry. He has an older sister Ellen. His father was a radio engineer and in the army, stationed in Long Island and California during the war, and operated Aura Recording studio, which he also co-owned.

The family moved to Roosevelt on New York Long Island in 1955. Howard attended Washington-Rose Elementary School and then followed by Roosevelt Junior-Senior High until 1969 when the family moved to Rockville Centre in June 1969. He transferred to South Side High School and graduated in 1972. He was given the name Tzvi in the Hebrew school he attended.

Howard gained a first-class radiotelephone operator license from Radio Engineering Institute of Electronics in Fredericksburg, Virginia in 1975. The permit was required for all radio broadcasters, which got him his first job at WNTN in Newton, Massachusetts.

After his graduation, Howard Stern struggled with confidence; he fumbled around a few positions before contacting WRNW in Briarcliff Manor Studio to cover shifts surrounding Christmas holidays in 1976. He was later hired full-time and became the production director a few months later.

In 1979, Howard took a job at rock station WCCC in Hartford, Connecticut; he left a year later for WWWW in Detroit, Michigan. He met Dwight Douglas, a consultant when he was working in Hartford. Dwight Douglas got Howard a new job when WWWW changed to a country radio station. Howard started hosting mornings at album-oriented rock station WWDC in Washington, D.C. in 1981. It was where he met Robin Quivers, a newswoman and former U.S. Air Force nurse, who later became a permanent part of his team. He was fired on June 25, 1982, as his relationship with the station management had declined.

When Howard Stern worked at WNBC-AM after his stint with WCCC, there were a lot of frictions, as the company tried to control his controversial style. It operated until 1985, for conceptual differences. The company also allowed him to let him out of the contract instead of paying him, so Howard moved to WXRK, better known as K-ROCK. He syndicated his show a year after working in K-ROCK, and successfully dominated ratings.

After years of fighting with radio management and Federal Communications Commission (FCC), Howard Stern signed off his last terrestrial broadcast radio show on Friday, 16 December 2005. His new career with Sirius Satellite Radio officially began on January 9, 2006, on Sirius Channel 100. His move to Satellite radio was predominantly due to it not being constrained by FCC.

Howard Stern tried TV when Fox network was looking for a replacement for The Late Show. He did five pilots with Leslie West and comedian Steve Rossi. When Fox did not pick it up, Howard hosted his event: Howard Stern's Negligeé and Underpants Party in 1988. He hosted The Howard Stern Show on WWOR - TV starting 1990, starring his staff and himself. In 2011, Howard Stern was a judge on the 7th season of America’s Got Talent, four seasons later the spot went to Simon Cowell.

He founded his own production company in 1994, which produced The Howard Stern Show, and helped his brother produce film adaptations.

Howard Stern published his first autobiography, Private Parts in 1993. Miss America was released in 1995, the book was New York Times Bestseller number one, and it was on the list for sixteen weeks.

Howard Stern considered himself a Republican but was against President George Bush. In 1994, he won the two-thirds majority on the first ballot under the Libertarian Party Ticket. His candidacy for Governor of New York ended when he refused to state his income. Later, when George Pataki won, he signed the “Howard Stern Bill,” which limits construction on state roads to eight hours in New York City and Long Island.

Howard Stern met Alison Berns in Boston University; they married at the Temple Ohabei Shalom in Brookline, Massachusetts in 1978. They have three daughters together. The pair divorced in 2001, due to his workaholic schedule. He dated a few people before meeting Beth Ostrosky. The couple married at Le Cirque restaurant in New York City in 2008. Despite being married, the pair does not live together.