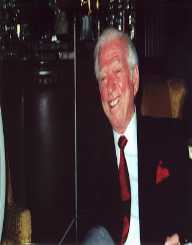 Sidney Sheldon was born February 11th,1917, in Chicago, Illinois. Renowned as a best-selling and prolific novelist, Sheldon is also famed throughout the world for his work on stage and on the big screen. The award- winning writer, screenplay writer, poet and producer released many period classics throughout his long-standing career that earned him the title as the seventh best selling fiction writer of all time.

Sheldon, born Sidney Schechtel, grew up with his parents, Ascher “Otto” Schechtel and his mother, Natalie Marcus. Possessing a passion for writing from a young age, Sheldon sold his first ever poem at the age of 10 for $5 to the Wee Wisdom children magazine. Sheldon attended East High School in Denver and worked a variety of job roles before graduating and enrolling at Northwestern University on a B'nai B'rith Hillel Foundation scholarship. After six months, due to the Depression at the time, Sheldon dropped out of university to return home and helped support his family.

In 1937, Sheldon moved to Hollywood, California and in turn, New York. Here, he tried his hand at writing jazz songs which he unsuccessfully tried to promote in the Tin Pan Alley. After working in a drug store and other lower paid job roles, Sheldon secured a job reviewing film scripts and working on various B-movies features back in Hollywood for around $22 a week. In his spare time, Sheldon could be found writing screenplays. He was able to sell his first screenplay in 1941 for $250.

During World War II, Sheldon enlisted as a pilot in training but his unit was disassembled before being called into action. After the war, Sheldon relocated back to New York where he returned to writing and experimented writing musicals for Broadway. During this time, he continued to write screenplays for Paramount Pictures and MGM Studios.

Due to his ever increasing popularity, in 1948, Sheldon returned to Hollywood where he was employed into his first role working on The Bachelor and the Bobby-Soxer, a hugely popular title that won Sheldon his first ever Academy Award.

In 1963, Sheldon continued to broaden his horizons with the rising popularity of television. His first hit show, The Patty Duke Show, was an instant hit and continued to be successful for nearly a decade. For seven years, he wrote the script for nearly every episode. He continued to write for television; creating, producing and writing scripts for a variety of successful shows at the time, including the award-winning comedy series, I Dream of Jeannie. Sheldon was writing for more than four shows between the years of 1963 and 1968, all at the same time, many of which he wrote under one of his three pseudonyms. These were Mark Rowane, Allan Devon, and Christopher Golato. He used these three names due to the fact he felt the shows credits were displaying his birth name too often.

By 1969, Sheldon had written and released his first novel, The Naked Face. His second release, The Other Side of Midnight, shot straight to #1 in The New York Times Best Seller list, selling over eight million copies. The same can be said for his ensuing novels, many of which were made into television shows and films. Sheldon exclaimed many times that he loved writing books and that it was his favorite medium.

As time went on, Sheldon focused more and more on releasing novels, traveling the world and living in a variety of countries for inspiration and continued to follow his passion for writing.

Sheldon first married in 1945 to Jane Kaufman Harding, a impulsive marriage that lasted only three years. In 1951, Sheldon remarried to Jorja Curtright, a stage actress that went on to become a interior designer. She featured in a Season One episode of I Dream of Jeannie. She passed away due to a heart attack in 1985. The couple had one daughter, Mary, who followed in her father's footsteps and became a novelist. Sheldon remarried in 1989 to former child actress, Alexandra Joyve Kosoff. They wed in Las Vegas and were together until Sheldon's death in 2007.

Sheldon died as a resident of Palm Springs, California. He passed away January 30th, 2007 due to complications when he contracted pneumonia. He died after being submitted to the Eisenhower Medical Center, only 12 days before his 90th birthday. He was cremated and his ashes were delivered to the Westwood Village Memorial Park Cemetery.

Notable book releases include If Tomorrow Comes (1985), Master of the Game (1982) and Tell Me Your Dreams (1998). The majority of his books featured female lead roles, each of which displayed strong acts of femininity, resulting in the majority of his readers being women. Due to the attitude of the era towards equality and women, Sheldon had few positive highbrow critics, yet he continued to promote himself and his work regardless.

Sheldon received a variety of coveted awards throughout his career.

He was also nominated for The Primetime Emmy Award in 1967 for Outstanding Writing Achievement in Comedy for I Dream of Jeannie and the WGA Award for Best Written American Musical in 1963 for Billy Rose's Jumbo.

Sheldon also held the Guinness World Record for Most Translated Author of all time for many decades.

Sheldon suffered from a severe bipolar disorder and manic depression throughout his lifetime, notable from a young age. At the age of 17, he was discovered by his father contemplating suicide, drunk on whiskey with several bottles of sleeping pills in his possession. The sleeping pills were obtained through theft whilst working in his drug store clerk position. There is a detailed account of this event that can be found in his autobiography, The Other Side of Me (2005).