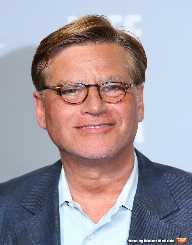 Aaron Benjamin Sorkin is an American playwright, screenwriter, and a producer. He was born on June 9, 1961, in New York City. He started off as an actor before he realized his passion for writing. He has written and produced award-winning plays and movies.

Sorkin was born in Manhattan, New York. He was raised in Scarsdale, a suburb in New York by his Jewish parents. His mother was a teacher while his father worked as a copyright lawyer. He had an older brother and sister, both who pursued law in college. He grew up with interest in plays and acting, and his parents nurtured his interest by taking him to shows such as "Who's Afraid of Virginia Woolf?" and "That Championship Season."

Sorkin was enrolled at Scarsdale High School. He was very active in drama and theatre club in the school. When he was in eighth grade, he acted as General Bullmoose in the "Li'l Abner". Scarsdale High Senior class produced "Once Upon a Mattress" where Sorkin acted as Sir Harry. He was also the school's vice president in his junior and senior years. He graduated from the school in 1979.

In the same year, Sorkin attended Syracuse University to study Fine Arts. He failed an important core subject while he was in the first year of the school. This was a major setback for him since the institution did not allow students to join drama club before they successfully complete the freshmen core subject. Acting was the main interest for Sorkin, and therefore the failure was devastating for him. Determined to succeed, Sorkin went back to his sophomore year, and he graduated in 1983.

Sorkin graduated from Syracuse University in 1983 after which he moved to New York and started doing odd jobs to make ends meet. He was a limousine driver, bartender, delivering telegrams and touring Alabama with Traveling Playhouse Company, a children's theatre company, distributing fliers to promote a hunting-and-fishing show. He later got a typing job with IBM Selectric typewriter.

Sorkin did well in writing and finished his first play "Removing All Doubt". He shared the play with his Syracuse University's theatre teacher, Arthur Storch, and he was encouraged by the quality level of the play. The play was staged by theatre students at the University.

In 1988, Sorkin's play sold his movie rights of the famous film "A Few Good Men" to David Brown. This earned him a six-figure amount making it the first significant achievement in the industry.

In the early 1990's, Sorkin got a screenwriting job in the production house called the Castle Rock Entertainment Inc. during this period; he wrote several films including "A Few Good Men", "The American President" and "Malice". All these films performed very well the film's market with an outstanding achievement of $400 million at the box office

His career in the film industry continued to flourish as he worked, as a script doctor, on other films such as "The Enemy of The State" where Will Smith be was the lead actor and "The Rock". This work was, however, uncredited.

In 1998, Sorkin started a comedy series called the "Sports Night" which was aired by NBC channel. This first attempt in the television was, however, unsuccessful as the series was canceled due to poor rating. In 1999, he wrote the second series "Westwing" which was broadcasted by Warner Bros TV. The TV show was a success, and it won nine Emmy Awards.

In 2005, he went back to his earlier famous play "A Few Good Men" which showed in a London theatre and received positive reviews from its audience. In 2007, Sorkin released a film titled "Charlie Wilson's War" with main cast characters being Tom Hanks and Julia Roberts. In the same year, he co-wrote screenplays for the "Moneyball" and the "The Social Network". He is currently working with Steve Jobs, and it is believed that he has completed a film directed by David Fincher. The film is yet to be named.

His play "Hidden in This Picture" was turned into a full-length movie named "Making Movies" which earned him a place in the art and film industry.

His play "A Few Good Men" was adapted under the same name. It turned out to be a major success in the Box Office.

He participated in the production of several movies, all of which were well received in the market. They included "Moneyball", "The American President" and "Malice."

He and nine other producers of "The West Wing" shared "Primetime Emmy Outstanding Drama Series" for four consecutive years from 2000.

In 1987, he started using narcotics and became addicted to the drugs. He went into a rehabilitation centre in Minnesota. He came out of the rehab only to be arrested for the possession of Marijuana in the airport.

In 1996, he married Julia Bingham, but they divorced in 2005 due to his addiction. They had a daughter named Roxy. He then dated actresses, Kristine Chenoweth and Kristin Davis

Sorkin supports Democratic Party, and he is popular for airing his political views.