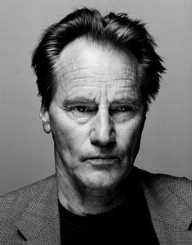 American actor and writer Sam Shepard was born Samuel Shepard Rogers III in Fort Sheridan, Illinois to Jane Schook, a teacher, and Samuel Shepard Rogers, a former US army pilot, farmer and teacher. The family moved from time to time, living in both Florida and Utah before settling in California where they owned an avocado farm in Duarte.

His father was an alcoholic, and after a family dispute, Shepard left home. At some stage, he became interested in writing and went to New York City where he did various menial jobs while at the same time beginning to write one-act plays. His plays made an impact, and he quickly gained attention with works such as Cowboys, The Rock Garden, Icarus’s Mother and La Turista.

In the late 1960s, he was co-writer of the script for Me and My Brother (1969) as well as Zabriskie Point (1970), Cowboy Mouth (1971) - which he wrote and starred in alongside Patti Smith; and Back Bog Beast Bait (1971). He moved to London in the early 1970s where he was introduced to the stage director Peter Brook who influenced him. After returning to the United States, he toured with Bob Dylan’s Rolling Thunder Revue and also worked on Dylan’s film Renaldo and Clara (1978).

Shepard won a Pulitzer Prize for Buried Child. He was nominated for an Academy Award: Best Supporting Actor for The Right Stuff (1983). In 1992 the American Academy of Arts and Letters presented him with a gold medal for drama,  he was inducted into the American Theater Hall of Fame and was nominated for a 2012 Cinema Writers Circle Best Actor award for Blackthorn. He also won nine Obie awards plus many other awards and nominations.

He married actress O-Lan Jones in 1969, and they had a son Jesse Mojo (b.1970). The couple divorced in 1984. During this time, between 1970 and 1971, he had a relationship with the musician Patti Smith. He met the actress Jessica Lange while filming Frances in 1983 and they began a relationship which lasted until 2009. Lange and Shepard had two children: Hannah (b.1985) and Samuel Walker (b.1987). Sam Shepard died on the 27 July 2017 from complications of motor neuron disease, ALS also known as Lou Gehrig's disease.