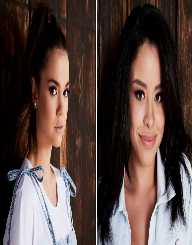 At only thirteen years of age, Devin Ramirez came to prominence as an all in one person. She gained extra recognition as a model, dancer, and promising actress. Above all, she is a social media person who embraced fame when she shared his current videos on Musical.ly. She started to post her current videos just like any other teenager would have done.

But she got more followers which made her embrace the world of social media. She became a regular visitor to Musical.ly application to date. Aside from rising as a social media personality, she loves to dance which has made her join the Los Angeles Sparks dance team. There is no doubt that Devin has tons of things to offer to the world; I wonder what else she wants to become when she ‘grows up.’ Let’s see what we have in this young generation’s life.

On 26, December 2003 Devin Ramirez was first seen in the world in the United States. She loves to pass the time with her two siblings: Dominick and David. Before celebrating her tenth birthday, Ramirez had over 300,000 fans on her social media account. Being an active member of Musicaly.ly, she has already garnered a verification crown from the said application.

Tons of people know her as a Musical.ly celeb. There is a little bit more to her than just being a social media personality. Since inception at about five to six years of age, she learned all by herself how to dance. It is one of the notable talents that have allowed her to compete in musical companies such as Temecula Dance Company. Besides, she also partnered with Sierra Haschak where they appeared on a solo album. Early in 2016, she joined Los Angeles Sparks which is regarded as a prestigious dance team in LA.


Ramirez’s As A Rising Star

Before jumping into my conclusion, Devin has proved to be a rising star in every way. When it comes to her Instagram account, she has more than 38,000 followers. Scrolling back to her Musicaly.ly application she has over 600,000 fans. Her YouTube account has over 10,000 subscribers. I wonder how many of us still have a low fan base and we are always active on our social media platforms.

The good thing is that Ramirez realized her dreams and ambitions early enough. This gave her a chance to explore further to date. With huge fan base across the world, I won’t argue more than to say she is a trending personality. In other words, she is a rising star. There is no doubt that Devin Ramirez has lots of things to offer to the world. As they say; only time will tell. You better watch this space.