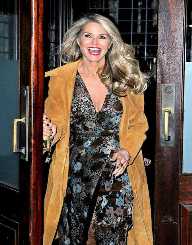 Twirling and whirling for the cameras is what Christie learned over forty years ago. Since then she embraced modeling as a career. At 63 years of age, Christie is still in her youthful self. Her ever glowing skin says it all. After an extensive career as a supermodel, with three children and four divorces, she is quietly an uptown girl in her way. Along the way, she has inspired prominent names in entertainment field including Billy Joel, an American singer. She also makes a perfect actress and a promising singer.

With a 5’ 9” height Christie comes with a realistic and sensible approach to life. She prefers to stand firm with her sensuous feet on the ground. Although at times she likes to aim higher beyond her reach. Nevertheless, she is a reliable, strong, independent and constant lady. Great virtues and endurance instill in her inner soul, but he hates to make a wrong turn. If something isn’t good, she better leave it than cry her eyes out. This is seen in her married life; she prefers her schedule. She can at times bring out her better soft and gentle care, but also stubbornness is also a part of her daily life routine. This is seen when she had a controversy with her ex-husband, Peter Cook.She hates time managers since her own pace speaks about her ever-glazing life. As a reminder, if you want to keep her as a close friend, show her love, affection, and charm.

On February 2 in 1954 Christine Brinkley was born in Michigan, Monroe in the United States. He was born to a television producer, Don Brinkley and a perfect homemaker, Marge Brinkley. At her tender age, she loved everything to do with artistic industry. At 18 years old, she moved to Paris where she joined an art school in 1972. She later served as an illustrator for more than two years. One of the American photographers spotted her on the New York’s street. It was here that she started to appear on cover magazines and billboards. Despite the high pressure that she was experiencing, she soon found herself as a promising model.

In the mid of 1980s, Christine Brinkley appeared in more than 200 magazines cover. From 1979 to 1981 she decorated three back-to-back Sports Illustrated Swimsuit covers. Afterward, she was seen in several of commercial products such as Prell shampoo and Cover Girl cosmetic.

In 1983 Christie went to try on her acting career. It was here that she appeared in an Uptown Girl film followed by National Lampoon’s Vacation. She then returned to her former career where she served as poster girl in one of the famous magazine in New York. Her modeling career started to fade in the 1990s where the world introduced new fashion norms as well as modern models.

Brinkley started a live talk show on CNN that was famously known as Living in the 90s.To date, she acts as a spokeswoman for Total Gym line of fitness products. She also serves as a Cover Girl line representative.

Christine Brinkley is an active member of UNICEF and Susan G. Komen Foundation. In 1973 she was married to Jean Allaux, but they parted ways in 1981. She was then married to Billy Joel in 1985 till 1994 when they called it quits. However, they had a daughter named Alexa Ray. In 1995 Christie got married again to a real estate developer, Richard Taubman in 1994.The couple was blessed with a son called Jack Paris. Her third marriage led to divorce in 1995. The following year she wedded Peter Cook and architect where they were blessed with a daughter: Sailor Lee. In 2006 Brinkley found that Peter had an outside affair. Several disagreements followed, and everything went back to its normal state in 2008.They filed for a divorce, but they're still in controversy to date. Christine reprised as an actress in Chicago play in 2012. In 2017, she was applauded by her fans for appearing on the Sports Illustrated cover page at 63 years old.