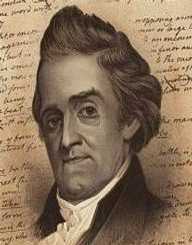 Noah Webster was born in Connecticut (West Hartford) on October 16, 1758. He came from a colonial family - with his father doing farming and weaving, and his mother engaged in household endeavors. Webster grew up at a time when few people went to college, but he loved learning that his parents sent him to college.

Webster was passionate about how people used grammar and spelling that led him to publish a spelling book. He became a textbook pioneer, political writer prolific author and editor. Noah Webster was probably the first person to publish a dictionary in American English. He died in 1843, May 28.

Noah Webster, Jr. was born in the western division of Hartford on October 16, 1758, to an average colonial family. He was brought up during a time when few people were enrolled in college. He and his two brothers helped his father at the farm while his two sisters helped with the house chores. However, Noah loved learning and was passionate about books which made his parents take him to Yale, the only college in Connecticut.

In, 1774 at the age of 16, Noah left for New Haven where he graduated in 1778. Noah’s thirst for education was not quenchable as he wanted to study law, but his parents could not afford to give him money. Therefore, Noah became a teacher in Glastonbury and Hartford to earn a living. Luckily enough his efforts enabled him to study law.

It was during the revolutionary war that Noah Webster was inspired to change the conditions of the schools in his country. He considered them as being dismal and of poor value since many children flocked in one class with no desks and poor books. The fact that these American children were at the hands of untrained teachers inspired him to write schoolbooks.

Noah thought to himself that the children should learn from American books and not British. In 1783, Noah wrote his first textbook known as ‘a Grammatical Institute of the English Language. He also came up with the “Blue-Backed Speller” which was considered to be the first dictionary ever created in the USA. After his publication of the book ‘A Reader’ in 1785, Noah went on a tour for eighteen months to promote his books in the southern part. He also sought for registration with the state copyright.

Webster later on in 1787 rebranded his books ‘Reader’ to ‘An American Selection of Lessons’ and ‘Grammatical institute’ to ‘The American Spelling Book.’ Noah’s books have for decades changed the lives of the American Children in regards to reading, spelling and pronouncing.

Noah Webster married Rebecca Greenleaf in 1789 with whom she had eight children and several grandchildren. He lived in New Haven with his family before moving to Massachusetts where he contributed in founding the Amherst College. The family, later on, moved back to New Haven where he embarked on writing and publishing schoolbooks and also founded New York’s first daily newspaper in 1793.

In 1801, Webster started to work on definitions as he defined the words Americans used differently to make people in America spell and speak the same way. For example, he used ‘music’ instead of ‘musick’ and ‘color’ instead of ‘colour.’

In his latter publication of the American dictionary (Webster), Noah added some words that were not initially included in his first edition like ‘squash’ and ‘skunk.’ With his first 1806 edition only giving brief definitions of about 37,000 words, Noah improved his second edition after 22 years. This second edition defined over 65,000 words which ended its publication in 1828.

Noah Webster is celebrated for his many achievements that cut across the American state. From fighting for the American language to improving the condition of schools, the nature of learning and unifying the American people in speaking one language. He wrote textbooks, magazines and fought for copyright laws and the abolition of slavery. He is also known to have written his version of the American Bible ‘The Webster’.

To date, Webster remains the American hero. Noah Webster died on May 28, 1843, at the age of 84 in New Haven, Connecticut, U.S. and is buried at the Grove Street Cemetery.