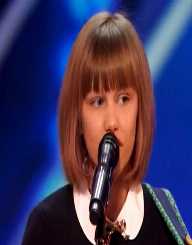 Grace VanderWaal was the winner of the 11th Season of America’s Got Talent; she is a singer and has a Youtube Channel.

Grace Avery VanderWaal was born on 15 January 2004, in Lenexa, Kansas City. She has an older sister and older brother, to parents David and Tina Vanderwall. In 2011, the family moved to Suffern, New York.

Grace Avery started to write her songs since she was three years old, using a wireless microphone. At eleven years old, she saved money and bought herself a ukulele after watching Youtube videos and a friend playing it. She was part of the school’s marching band, playing the saxophone. After she learned how to play the ukulele, Grace performed on her Youtube channel: Oh Never Mind It’s Just Me, where she posted her version of favorite songs.

Grace VanderWaal attended Suffern Middle School before she went to the competition. She also studied music theory to supplement her songwriting skills. Post-win, her parents, have since decided to homeschool her.

Grace Avery began to perform during open mic events at small venues near her home and to study music theory. In July 2016, after her audition on AGT, Grace Avery played at the Lafayette Theatre in Suffern and the Ramapo Summer Concert Series at Palisades Credit Union Park.

Before her participation in America’s Got Talent, Grace VanderWaal used to perform in small venues near her home. She was enrolled in the competition in 2016 by her mother Tina and played I Don’t Know My Name for her first audition.

Grace was given the gold buzzer by Howie Mandel and proceeded to do the live shows. After her audition, Grace sang at Lafayette Theatre, followed by Ramapo Summer Concert Series at Palisades Credit Union Park.

For her quarterfinal performance, Grace sang Beautiful Thing, which she wrote herself with the ukulele. She dedicated the song to her older sister Olivia and won enough votes to move into the semifinals.

Grace sang Light The Sky, another of her original song; she gained enough votes to be in the finals. She won the eleventh season of America’s Got Talent with the song Clay, which she wrote about dealing with bullies.

For the finale, Grace won the show with her audition song: I Don’t Know My Name again. She won one million dollars and a headline show in Las Vegas. She became the first female act and first child act to win the show with only original songs.

Grace Avery was also invited to sing at the 2017 Special Olympics World Winter Games in Austria, performing with idol Jason Mraz for the opening, and alone for the closing.

After the win, Grace Avery had four sold-out concerts at the Las Vegas Planet Hollywood Resort & Casino, featuring another finalist from America’s Got Talent. She also headlined the Holiday Spectacular, singing her version of Frosty the Snowman.

Grace VanderWaal donated a portion of the win to charity, including to help establish an elementary school choir in East Ramapo Central School District. She also appeared at WE Day Illinois and a benefit gala, both charity events.

Grace VanderWaal first won America’s Got Talent show. Then she won Radio Disney Music Awards in the same year. Grace was the youngest finalist for the International Acoustic Music Awards, for the female artist category.