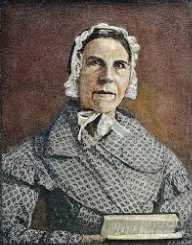 Sarah Moore Grimke was a prominent abolitionist, prolific writer and advocate of the women’s suffrage movement.

Sarah Moore Grimke was born in Charleston, South Carolina on November 26, 1792. She grew up on a farming plantation with her younger sibling Angelina. Her parents were John, a judge in the State Supreme Court, and Sarah Smith Grimke. She detested the curtailed roles of women imposed by the patriarchal society. As a child of the south, she saw the daily abuses slaves endured in their lives. Grimke developed an early anti-slavery conviction in her.

She got private tutors to study sewing, painting, and dressmaking at home. Despite the riches, Grimke never went to school, like the brother. Her brother Thomas graduated from Yale University. Grimke learned classical Latin, Greek, mathematics, and geography. She mastered the subjects and soon started teaching the hundreds of slaves on their family plantation.

To console herself, Sarah Moore Grimke regularly visited the more liberal Pennsylvania. She met the Quakers who captured her interest with their beliefs. The Quakers’ Society of Friends, a Christian denomination, had a set of values that elevate women and abhorred slavery of any kind. When she reconciled her views with theirs, Grimke joined them. She left Charleston and settled in Philadelphia in 1829.

Some years later, her younger sister Angelina followed her by joining the Quakers. They became active members of the society propagating its views with zeal. They published two booklets spreading the rights of slaves, which attracted harsh condemnation from the slave owners. Grimke wrote the Epistle to the Clergy of the Southern states, while Angelina wrote An Appeal to the Christian Women of the South. The circulating booklet copies were burned, and the sisters threatened with arrests or death by the lynching mobs in South Carolina.

In 1839, the sisters were expelled from the society after flouting one of the laid down regulations. Angelina married fellow abolitionist Theodore Weld in 1838. Angelina stuck with her husband, who was not a Quaker. As a result, Quaker society expelled her. Grimke followed her in protest of the expulsion.

Sarah Moore Grimke paired with her sister in advocating for the rights of black slaves. Angelina wrote a letter to the editor of the anti-slavery journal The Liberator. The editor William Garrison published the letter decrying the inhuman subjugation. The two sisters were invited to an audience with the state legislative assembly. They became the first women in US history to testify against slavery, and advocate for their rights in front of an elected legislative assembly.

Grimke appeared at the Anti-Slavery convention held in New York in 1837. She embarked on an anti-slavery campaign with her sister in New England. The sisters continued to elicit abolitionist sentiments among their supporters. Grimke and her sister engaged the public in open forums during their tours. They gained popularity for their debates with men on the slavery topic. She defied the laid down gender barriers by publicly leading a campaign against an idea propagated by a dominant male-dominated society.

Unlike her outspoken sister, Sarah Moore Grimke used her writing prowess in articulating her views. She wrote several letters in her quest to promote the emancipation of women from the gender disparities. In 1837, she wrote successive letters to the editor of New England Spectator underbid the title of Letters on the Equality of the Sexes.

The publication of the letters drew condemnation from the Congressional General Association. In the reply, the association wrote the Pastoral Letters. In it, they denounced the feminist ideas of Grimke. They condemned the feminist ideals as from women who overstepped their societal gender roles. Grimke withstood the onslaught and continued in her quest. She held a public forum every day of the week to advocate for the rights of women.

Sarah Moore Grimke continued living with her sister Angelina even after her marriage to Theodore Weld. The three settled in New Jersey. They focused their energy on educating black students and women. In 1851 they established a boarding school in Eagleswood headed by Weld. Grimke taught at the school until the civil war in 1862. Grimke allied herself with the Union army during the American Civil War.

The sisters accepted their first black students after the abolition of slavery by President Lincoln. They nurtured their two African American nephews from high school to the university. They were children of their elder brother Henry and a slave woman Nancy Weston. Archibald Henry Grimke went to Harvard Law School, while Francis James Grimke went to Princeton Theological Seminary.

In continuing the fight for the rights of African Americans and American women, she served in several organizations. She became the vice president of the Massachusetts chapter of the Woman Suffrage Association in 1868. She continued distributing publications calling for the rights of women even in her late 70s.

Sarah Moore Grimke died in Hyde Park on December 23, 1873. Grimke and her sister fought for the rights of slaves and women in the US. They endangered their lives by defying the clergy and their parents in the daily struggle for equality.

Grimke and her sister saw their dream of the abolition of slavery come true after the Lincoln Emancipation Act that abolished slavery came into effect.