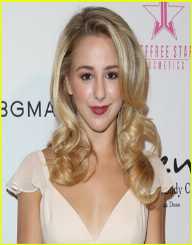 Chloe Lukasiak was born on May 25, 2001, in Churchill, Pennsylvania, USA. Her parents are Christy and Marc Lukasiak. She also has a sister, Clara, who is also a dancer.

Chloe Lukasiak began taking dance lessons when she was only two years old. Some of her favorite dance styles include jazz, contemporary, and lyrical dance.

Chloe Lukasiak began performing with the Abby Lee Dance Company. She appeared on the hit reality television show, Dance Moms, which is based in the dance company, with her mother and in later episodes, her sister. She first joined the show in its first season and continued to work on it through the third season. All in all, she has appeared on about one hundred episodes.

While on the show, Chloe quickly showed everyone her skill. In the first three seasons, she was on the show, and she was at the top of the pyramid (a sort of scale that Abby Lee uses to judge who is the best dancer in the group) five times.

Chloe had to eventually leave the show because she needed surgery, as she was suffering from silent sinus syndrome. After she recovered, she returned to dancing, but she did not go back on the show. However, she has mentioned going back on the show for the season finale in 2017.

Chloe Lukasiak’s dancing skills have earned her roles in a couple of movies. One movie, which centered around dancing was played on Lifetime, called Center Stage: On Pointe. She also had a small role in the indie film, Loophole. She shows interest in acting in more movies in the future.

Chloe Lukasiak has done some modeling work for a dancewear company, Just For Kix. She wasn’t just showing off the clothes. Instead, the ad also doubled as an anti-bullying campaign. Stopping bullying is something that Chloe is passionate.

Chloe has also modeled for other companies, including Glitzy Girl, Reflex, and StyleHaul.

Chloe Lukasiak has her own YouTube channel named after herself. On the channel, she posts videos of herself dancing, fashion advice, makeup tutorials, and dance lessons for fans. Her channel is popular with young girls and fans of the show Dance Moms.