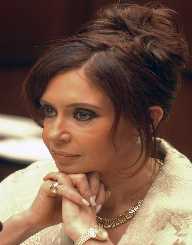 Cristina Fernandez de Kirchner was born on February 19, 1953. She is an Argentine lawyer and politician. She served as the President of Argentina from 2007 to 2015. She was the first directly elected female president.

Cristina Fernandez de Kirchner was born on February 19, 1953, in La Plata in Argentina. She was born to Eduardo Fernandez who was a bus driver and Ofelia Esther Wilhelm. She attended the National University of La Plata where she studied law.

In the 1970s there was political chaos in Argentina, and so she and her husband moved from La Plata to Rio Gallegos where they worked as lawyers. In 1983, democracy was restored in Argentina. Cristina Fernandez de Kirchner began started her political career as a provincial delegate of the Justicialist (Peronist) Party convention in 1985. At the same period, her husband also became a successful politician. In 1989, she was elected to the Santa Cruz Provincial Legislature. In 1993, she was re-elected into the same position. In 1995, she was elected as a representative of Santa Cruz in the Senate. In 1997, she was elected to the Chamber of Deputies. In 2001, she was appointed to the Senate. She assisted in her husband’s presidential campaigns. In 2003, her husband became the President of Argentina. She became the first lady.

Cristina Fernandez de Kirchner was also appointed as an itinerant ambassador for her husband’s government. In 2007, her husband did not run for the presidency, and he proposed her to run as President. In 2007, she became the President of Argentina. In 2009, she introduced a universal child benefit plan for fighting poverty which led to the reduction of poverty. The benefit plan also led to the boost in school attendance rates. In 2010, she cleared almost all of the debt that had accrued during her husband’s administration. In the same year, she gave a speech at the International Trade Union Confederation Global Summit in Canada. She also attended the bicentenary of the Independence Celebrations in Venezuela where she sought to achieve right relations with the other Latin American States.

Cristina Fernandez de Kirchner also signed several treaties with Venezuela which related to energy, food, and technology. In 2011, she ran for the presidency again, and she was successful. Her second term was however challenging as the economy of Argentina was getting worse. Her tenure was also associated with claims of corruptions and political scandals. She stepped down from the office of the President in 2015 as she could not run for a third term.

In 2010, Cristina Fernandez de Kirchner was awarded the Order of the Sun by the Peruvian President. Alan Garcia.

In 1975, Cristina Fernandez de Kirchner got married to Nestor Kirchner with whom she has two children, Maximo and Florencia. Her husband died in 2010. She is currently sixty four years old. She has a net worth of $14 million.