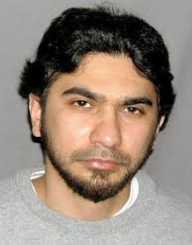 Faisal Shahzad is a Pakistani-American terrorist.

Faisal Shahzad was born in the city of Karachi, Pakistan, on June 30, 1979. His father, Baharul Haq, was an Air Marshall in the Pakistani Air Force and the head of the Pakistan Civil Aviation Authority. He grew up in a wealthy household with servants and armed guards.

Because of his father’s career, Faisal Shahzad and his family moved around a lot. He attended primary school in Saudi Arabia and several high schools in Pakistan. He joined Greenwich University, a business school in Pakistan. In 1997, he moved to the U. S. to study at Southeastern University in Washington, D. C. He then continued his education at the University of Bridgeport in Connecticut. He earned a Bachelor of Arts in information systems and a Master of Business Administration.

Faisal Shahzad's parents arranged his marriage. In 2004, he married Huma Asif Mian in a ceremony in the city of Peshawar, Pakistan. She was an accountant, and they had two children together. In 2009, he pressured her to wear a hijab and told her that they should go live in Pakistan. He left their home and told her it was her choice whether she wanted to follow him. She refused and instead took the kids and moved to Saudi Arabia with her parents.

Around 2006, Faisal Shahzad became much stricter with his religion. He started telling his friends that Muslim extremism was justified. In 2008, he wanted to become a soldier in Afghanistan, but his father forbade him. In April 2009, he became an American citizen. A few weeks after that, he quit his job and stopped paying his mortgage. He soon went back to Pakistan and spent the next few months in a terrorist training camp in Waziristan.

In February 2010, Shahzad went back to the U. S. He bought a 1993 Nissan Pathfinder from a Craigslist ad. On May 1, he left the car in Times Square in New York City. Several people noticed smoke coming out of the car and called the police. The police discovered a car bomb which had failed to explode. They disarmed the bomb, and there were no casualties. Two days later, they tracked down Shahzad at John F. Kennedy International Airport and arrested him.

In October 2010, Faisal Shahzad pleaded guilty to all of the charges. He was convicted of attempting an act of terrorism, conspiracy, and eight other charges. He was sentenced to life in prison with no parole and imprisoned at the ADX Florence in Colorado.