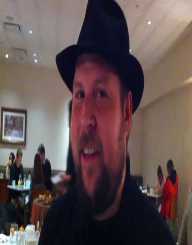 Markus Alexej Persson, also known as Notch, was born on June 1, 1979. He was born in Stockholm, Sweden, but for the first seven years of his life, he lived in Edsbyn. Persson began programming by using his father’s Commodore 128 home computer. He was at the time only seven years old. The following year, Persson produced his first video game, which was a text-based adventure game.

Until 2009, Persson worked as a game developer for King.com but then went to work as a programmer for Jalbum.

Markus Persson is most widely known for his creation of survival sandbox game Minecraft. The game was released in 2011. The success of the game let him leave his job as a game developer and focus full-time on improving his game. In 2011, his company Mojang AB sold their 1 millionth copy of the game, and only several months later their sales tripled. After his big success, Persson had to hire several staff members. He passed his lead developer role for the Minecraft to Jens Bergensten. The game is also available as a pocket version for Android and iOS devices, as well as an Xbox 360 edition. Persson sold Mojang AB to Microsoft for 2.5 billion dollars, and since has stopped working on the game.

Markus Persson and Jakob Porser have also created the video game Scrolls. The game has several elements from board games and collectible card games. He is not actively involved in developing the game.Persson was sued in 2011 for the trademark name Scrolls. Swedish company Bethesda Softworks claimed that the name conflicted with their series of games The Elder Scrolls. Persson decided to challenge the company to a game of Quake 3, to determine the outcome of a dispute, but the lawsuit went to court later that year. The lawsuit was settled, and Persson was allowed to use the Scrolls trademark.

In 2012, Markus Persson started developing an alternate reality space game, which was revealed in April the same year. The game 0x10c was later halted from production, but its soundtrack was released as an album in 2013.

Besides developing games, Persson has also participated in several Ludum Dare 48 hour game making competitions. For one of his entry’s in the contest, he produced a game Breaking The Tower. For Ludum Dare, he also produced Metagun, Prelude of the Chambered and Minecraft.

Markus Persson is a member of the Mensa society. He is also an electronic music producer.

In 2011, Persson met Elin Zetterstrand in the Minecraft community, but the couple broke up the following year. Persson has criticized piracy and stance of large game companies on piracy. He is a member of Swedish Pirate Party. He is also one of the principal donors for Doctors Without Borders. Persson has announced that he is an atheist. After the 2014 Mojang sale to Microsoft, Persson purchased an 8-bedroom, 15-bath, 23000 square foot mansion in Beverly Hills, California.