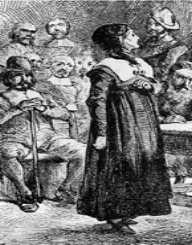 Anne Hutchinson was a Puritan spiritual adviser and an influential participant in the Antinomian Controversy, which for two years, 1636 to 1638 shook the infant Massachusetts Bay Colony. Born in July 1591, Anne Hutchinson gained intense popularity with her religious beliefs, which was contrary ones established by the Puritan clergy in the Boston area. Following the teaching of her mentor, John Cotton she had accused the local minister of preaching “covenant of work” instead of “covenant of grace” and made other pronouncements that the local ministers found offensive. This was what led to the Antinomian Controversy leading her trial and subsequent banishment from the colony in 1637. In March 1638, Anne Hutchinson was also tried by the church barred.

Anne Hutchinson and her supporter resettled in Portsmouth but later settled near an ancient landmark called Split Rock, currently The Bronx in New York City. The Siwanoys massacred Anne Hutchinson and her six children in August 1643 during the Kieft’s War. She since became a key figure in the development of religious freedom in England America colonies and the history of women in ministry.

Anne Hutchinson is born Anne Marbury was born in Francis Marbury and Bridget Dryden on July 20, 1591, in Alford, Lincolnshire, England. His father was an Anglican cleric with Puritan ideology, who believed the should be highly educated, but his superiors had contrary views. Anne Hutchinson was given good education more than her other peers at the time where education was almost exclusively for the male. In 1605, the family moved to London when Anne was 15 years. Her father had gained an appointed there as vicar of the Church of Saint Martin’s. Her father died when she was 19 years in February 1611.

Anne Hutchinson moved to Alford after the death of his father and getting married in 1612. It was there that she heard of the minister John Cotton, a Puritan who has been posted to Boston. Cotton’s preaching inspired her greatly that she also began to hold meetings in her home to review sermons and provided explanations to them. With time, the Puritans decided to govern their church based on a consensus of the parishioners and relieve itself from that of the Church of England. Cotton supported though a minister of the Church of England inclined to the ideologies of the Puritans and with that, he was removed as a minister. Threatened with imprisonment, he went into hiding and later left for New England. His departure according to Anne was "great trouble unto her," and stated, "could not be at rest" until she followed Cotton to New England.

In 1634, Anne Hutchinson with her husband and ten children set for New England aboard Griffin. The family lived Shawmut Peninsula, now downtown Boston where they built a house. The family became successful there, and while her husband William Hutchinson became a town selectman and deputy to the General Court, Anne Hutchinson cared for the sick and those in need and an active midwife. Anne Hutchinson joined the Boston church, which was the most important church in the colony.

Anne Hutchinson with her duties as a midwife and began discussions with women in childbirth in the line of the convertibles in England. Anne Hutchinson also commenced weekly meetings in her house for the women who were interested in getting further explanations and elaborations on Cotton’s sermons. These meeting became popular, and so she started having sessions for men too. As the meeting progressed, Anne Hutchinson also began giving her own beliefs, emphasizing that only "an intuition of the Spirit" would result in one being elected by God and not through good works. Her interpretations conflicted with those of the local ministers, but attendance at her meetings kept increasing. The local minister, therefore, raised concerns of her teachings contending it may confuse the faithful.

As Anne Hutchinson continued with what was referred to as unorthodox teachings, some of the ministers in the colony began to raise concerns bringing about religious tensions, which became known as the Antinomian Controversy currently referred to as Free Grace Controversy. These theological differences continued, and all previous attempts to tone the issues down proved futile including a public warning issued by magistrate John Winthrop on October 21, 1636. The then governor Henry Vane also favored Anne’s free grace doctrine, so not much measure was melted to contain her. This however changed when the governor was voted out of office and replaced by John Winthrop. Other officials who also supported her were all voted out. Wheelwright who had been supporting Anne on this course was tried and banished from the colony, and other supporters suffered the same fate. Anne also had her own share of the trials.

On November 7, 1637, Anne Hutchinson faced a civil trial presided over by John Winthrop on charges of "traducing [slandering] the ministers" being one who "troubled the peace of the commonwealth and churches" among others. During the hearing Anne Hutchinson pronounced to the prosecutors that, “You have no power over my body, neither can you do me any harm—for I am in the hands of the eternal Jehovah, my Saviour, I am at his appointment, the bounds of my habitation are cast in heaven, no further do I esteem of any mortal man than creatures in his hand, I fear none but the great Jehovah, which hath foretold me of these things, and I do verily believe that he will deliver me out of our hands. Therefore take heed how you proceed against me—for I know that for this, you go about to do to me, God will ruin you and your posterity and this whole state.” At the end of the trial, she was banished from Boston.

She later faced church trials, which also excommunicated her from the Boston Church. Some of her followers were also banished, hence, followed her into exile. They later settled on Aquidneck Island. While there, threats were made by the Massachusetts Bay Colony to take over the Island and with that Anne Hutchinson, with her six children, son in law and others numbering 16, moved settled near an ancient landmark called Split Rock, near what became known as the Hutchinson River in northern Bronx, New York.

Settling in at the area was probably a wrong timing it was soon plunged into unrests, and Anne Hutchinson and her family became victims. The Siwanyo of New Netherland feeling been mistreated started the series of violent incidents, which became the Kieft War. During the war, though the Siwanyo chief, Wampage had given awarning for everyone to be evacuated as every house was going to be burnt. However, Anne Hutchinson and her family still occupied their house during the time of the rampage. All the household members were scalped and set on fire. The only surviving person was Anne’s nine-year-old child, Susan who was taken captive and later sold for ransom to her family based in Boston.