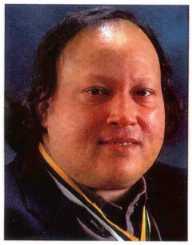 Nusrat Fateh Ali Khan was born on October 13, 1948, in Faisalabad. His was born shortly after India’s partition, and his family migrated to Pakistan. They moved to his parent’s native city Jalandhar in Punjab, India. His father was a musicologist, vocalist, instrumentalist, and qawwal. He was the youngest of five children in the family.

His family had a 600-year-old tradition of qawwali, which was passed down from generation to generation. However, his father did not want Khan to follow this tradition, at least initially. He wanted his son to choose a more respectable profession, like medicine or engineering. However, at a young age, Khan developed an interest in music, and his father had to accept Khan’s wishes. His uncles musically educated him from his father’s side.

Nusrat Fateh Ali Khan was coached by his uncles, including his uncle, Mubarak Ali Khan. After his death in 1971, Khan became the leader of the party, which became known as Nusrat Fateh Ali Khan, Mujahid Mubarak Ali Han & Party. His first musical performance as the leader of the group was a recording broadcast for the annual Radio Pakistan music festival- Jashn-e-Baharan.

In 1985, Khan performed at the World of Music, Arts and Dance Festival in London. Between 1985 and 1988, he also performed in Paris, Japan, and New York. He was first invited to Japan by the Japan Foundation and performed at the 5th Asian Traditional Performing Art Festival. In 1989, he caught the attention of New York’s audience at the Brooklyn Academy of Music.

After gaining world recognition, Khan became the Visiting Artist in the Ethnomusicology department at the University of Washington, Seattle in 1992. Khan began to participate in various projects. In 1988, he and Peter Gabriel teamed up for the soundtrack to The Last Temptation of Christ. He was also featured on Michael Brook’s albums MusttMustt and Night Song. Collaboration with Brook’s allowed Khan to stylize his music, blending it with western music.

After the success of his soundtrack with Peter Gabriel, the record label Real World released five albums of Khan’s Qawwali music. In 1997, Khan’s album Intoxicated Spirit was nominated for Grammy Award for Best Traditional folk album, and the album Night Song was nominated for Best World Music Album.

Khan has also contributed to his music to several Pakistani films, and composed music for Bollywood films, including Aur Pyaar Ho Gaya, Kartoos, KAchcheDhaage. He also contributed the song Gurus of Peace to the A. R. Rahman album Vande Mataram, to celebrate India’s 50th independence anniversary.

In the last years of his life, Khan was suffering from liver and kidney problems. He left Pakistan to receive treatment in London and was rushed from the airport to Cromwell Hospital. His doctor’s in London blamed Pakistani doctor’s since Khan contracted hepatitis while undergoing dialysis.

Khan died of cardiac arrest on August 16, 1997. He was at the time 48 years old. His wife Naheed Nusrat died in 2013, in Canada, where she moved after the death of her husband. They had one daughter, Nida Khan.