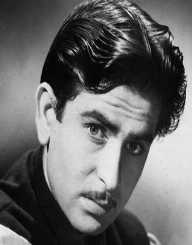 Raj Kapoor was the showman of Indian Hindi films. One of the pioneers in the industry, he was an actor, producer, and director of many accredited films in the Hindi language.

Raj Kapoor was born to a wealthy family in Peshawar on December 14, 1924. His original name was Ranbir Raj Kapoor. At the time of his birth, Peshawar was part of India, but after the partitioning, it is today in Pakistan. He got his early education from Colonel Brown Cambridge School and later went to St Xavier College.

His parents were Prithviraj and Ramsarni Kapoor. The Kapoor family was a well-established entity from the Punjabi region of India. Most of its members were well-known figures in the entertainment industry. Kapoor was the first born in the family of six children. Having an actor for a father, Kapoor learned the film industry from an early age. This also meant constant traveling with his parents was the order of his early life.

Not astonishing, Raj Kapoor had his debut in the film industry at the tender age of 10. In 1935, he starred in the film Inquilab. After working in various capacities in the Indian film industries, Kapoor landed his first significant role in 1947.

This was twelve years after his initial debut. His central actor role in Neel Kamal propelled him to stardom. This never surprised many though, since he was from the legendary Kapoor family. The Kapoor family had a long established history in Bollywood.

The following year, Raj Kapoor founded his film production studio R.K. Studios. Before starting his studio, he was working under his father’s studio. Barely a year into its founding, R.K. Studios had its first production in 1949. At the age of 25, he was the youngest director in Bollywood. Not surprisingly, Kapoor also cast in the film Aag.

He continued to act in leading roles as he nurtured his studio. In 1949, he had a role in the film Andaz. This was a film directed and produced by Mehboob Khan. Kapoor was on the director’s seat again in 1949. He successfully directed and produced the film Barsaat, which was well received by the public. Two years later, he directed another Hindi film hit Awaara.

This was followed by Shree 420 in 1955. In this politically inclined film, Kapoor brought up the national issues of the newly created country of India. Sticking to his trademark love and musical scenes, Kapoor explored the problems of poverty, individual national pride among other things.

Despite being a director, Raj Kapoor continued in his acting capacity. Sometimes he doubled as an actor and director in the same film. Some of the films he featured in were Jagte Raho produced in 1956; Ab Dilli Door Nahin produced in 1957 and Mera Naam Joker produced in 1970.

Influenced by the British acting the role of Charlie Chaplin, Kapoor modeled his movies in the same model as the British character. To create a unique production, he introduced musical scenes in his films. These scenes became extremely popular not only in India but throughout Asia and Eastern Europe.

Going by the long-standing tradition of the family, some of his later films had actors from two or three generations of the Kapoor family in the cast.

Raj Kapoor was born into a celebrity family by all standards. His paternal great-grandfather, grandfather, and father were all actors. He was married to Krishna Kapoor from 1947 to 1988. The couple had five children. These are Randhir, Rishi, Rajiv, Reetu, and Reema. Most of the Kapoor family is in Bollywood.

Raj Kapoor was proclaimed dead on June 2, 1988. He was 65 years of age. His death in the Indian capital New Delhi shocked most of the Bollywood fraternity. For a better part of his late years, Kapoor had been battling with asthma. Eventually, he succumbed to asthma-related complications.

Notwithstanding his family’s name, Kapoor worked hard to create his space. This is evident by the bold move he took to establish his studios in his early 20s. Kapoor was also honored five times by the Filmfare Awards. This is India’s equivalent of the American Oscar Awards. In 1971, he was honored by the distinguished medal of Padma Bhushan. This is the third highest medal bestowed to civilians by the Indian government, to acknowledge their service to the country.