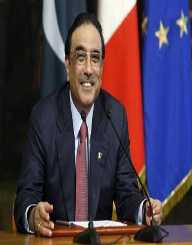 Asif Ali Zardari was born on July 26, 1955, in Karachi, Sindh. His father Hakim Ali Zardari was a tribal chief and landowner. Asif was the only child of his parents. As a child, Zardari enjoyed sports like polo and boxing. For a time he was a leader of a polo team Zardari Four.

Zardari appeared in a movie Salgirah when he was a child. He received his primary education from Karachi Grammar School and graduated from Cadet College in Petaro in 1972. Afterward, he attended the St. Patrick’s High School in Karachi. It is not clear where he studied next, but in his autobiography, Zardari claimed to have studied in Pedinton School in Britain and the London School of Business Studies.

Zardari began his political career when he ran for a district council seat in 1983. However, he lost in the elections and went into real estate business. In 1987, he married to Benazir Bhutto. After the death of General Muhammad Zia-ul-Hag, Bhutto became the first female Prime Minister of Pakistan, after her party won the 1988 elections. Zardari stayed out of his wife’s administration, but at the time he was involved in several corruption cases linked to the government. This eventually led to the collapse of Bhutto administration. In 1990, he was arrested for kidnapping and extortion. In the 1990 elections, Zardari was elected to the National Assembly, while he was still in jail. He was freed from jail in 1993 and became one of the 18 cabinet ministers in the caretaker government.

In 1993, Zardari’s wife once again won the election, and he became her Investment Minister, chief of intelligence bureau and head of the Federal Investigation Agency. In 1995, Zardari became the chairman of the Environment Protection Council. Bhutto’s government was dismissed in November 1996 and Zardari was arrested after attempting to flee the country. In 1998, The New York Times published an article on Zardari’s corruption and a waste of public funds.

In 1997, Zardari was in Karachi jail but was elected to the Senate. The following year, he was indicted for corruption after documents relating to money laundering surfaced. In 1999, Zardari and Bhutto were convicted and sentenced to five years of imprisonment. In 2003, Zardari was again sentenced to six months in prison for money laundering. In late 2004, Zardari left for exile in Dubai.

In 2005, Zardari suffered a heart attack and did not show up for a hearing on corruption charges. During his time in exile, Zardari had several legal problems. On December 27, 2007, Zardari’s wife was assassinated, and he returned to Pakistan. Bhutto had designated her husband as her successor and party leader. However, his son Bilawal Bhutto Zardari took the post.

Zardari and members of coalition moved to impeach Pervez Musharraf. When the plan succeeded Zardari launched a campaign and won the majority in the Electoral College. He was elected the President in 2008. He began to meet with several foreign leaders, like President George W. Buch and President of China Hu Jintao.

As the president, Zardari began negotiations of foreign aid with China. However, the country refused to aid. Also, Saudi Arabi, Britain and the United States refused to give Pakistan any bailout. He turned to the International Monetary Fund.
Zardari made several controversial comments, calling Kashmiri nationalist India terrorist. The 2008 Mumbai attacks further worsened the relationships between the two countries. He also worked towards improving the relationship between Pakistan and Afghanistan. In 2009, the Supreme Court ruled against the National Reconciliation Ordinance amnesty, which meant that corruption cases against Zardari were renewed. The legality of his presidentship was also under question. In 2010, the government passed the 18th Amendment, reducing the Presidents role only as a ceremonial figurehead.

In 2010, the floods in Pakistan resulted to become the nation’s largest national catastrophe. Zardari began his Europe tour, visiting France and Great Britain. Upon his return, Zardari visited the flood-affected areas. In 2011, Zardari went to Dubai to undergo treatment for what was initially reported to be a small stroke.

Zardari completed his term as the President in 2013, becoming the first elected president in 66 years of the country’s history to finish his tenure.

Zardari and Bhutto had three children together- a son Bilawal Bhutto Zardari, and daughters Bakhtawar and Asifa. When his father died in 2011, Zardari declined to assume the leadership of the Zardari tribe, instead of crowning his son as the tribe’s chief.

Zardari is estimated to be the second richest man in Pakistan. His net worth is around $ 1.8 billion.