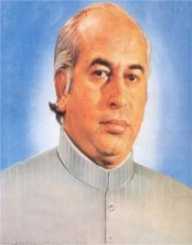 Despite his rather short time being in power, Zulifkar Ali Bhutto was one of the most influential Pakistani statesmen of the 20th century. Loved by many and hated by many others, he will remain in history with his image of an energetic and idea-rich leader. His political activity was remarkable not only on a state level but on the world stage, too. Below we will find out what made the Zulfikar Ali Bhutto such a prominent figure on the Pakistani political arena and what led to his execution by hanging.

Zulfikar was born on January 5, 1928, in Larkana, India (present-day Pakistan), to Sir Shah Nawaz Bhutto and Khursheed Begum, a Muslim Rajput family. His father was a prominent political figure in India at that time. Zulfikar obtained excellent education in the University of California (after having transferred from Bombay) and the University of Oxford. In these universities, he studied political science and law respectively. This undoubtedly contributed to his natural intelligence. Even during his student years, he was a political activist and was also able to practice his law education. Later he returned to Pakistan to establish his legal practice in Karachi.


On Set Of Political Career

He was eventually appointed as foreign minister, as whom he showed his character for the first time. He implemented a policy of making Pakistan more confident on the international arena. He strived to cut Western influence in the country and sought a closer relationship with China. This period offered him the greatest challenge a foreign minister could face – war. Namely, the war with India of 1965 over Kashmir. The conflict saw the intervention of the USSR and USA. It eventually ended with the signing of the Tashkent agreement, retaining the status quo. Zulfikar was a stern opponent of the agreement and in 1966 he resigned from his position. Late next year, he founded the PPP (Pakistan People’s Party) as a political opponent of Ayub Khan.

After spending a year in prison over his opposition activities against Ayub Khan, Zulfikar and his PPP entered the elections of 1970. Pakistan was then divided into West and East, with the latter, modern Bangladesh, promoting complete independence. The PPP won the votes in the West, but the idea of independence was too lucrative for the Eastern provinces to refuse. As expected, Zulfikar refused to recognize the victory of the separatists. This led to an armed conflict, involving India, which eventually resulted in Bangladesh declaring independence from Pakistan in 1971. Subsequently, Zulfikar Ali Bhutto received the government from Ayub Khan on December 20, the same year.

As mentioned, Zulfikar was an energetic politician, an intelligent and educated leader. He aimed for the removal of wide-spread poverty in the country and boosting the economy. He wanted to achieve that by nationalizing several sectors, especially the industrial. More rights were given to the workers, which marked the extensively non-western, socialist policy. Another step was the improvement of education for the masses. True, it was a double-edged sword. Many of his decisions were approved due to the illiteracy of the population.

His greatest involvement of the established order was the creation of a new constitution. The latter changed the form of government from a presidential republic to a parliamentary one. This meant that the president would have largely nominative duties, and the prime minister would exercise more power. After a sweeping electoral victory, he became Prime Minister himself on August 14, 1973. As such, he became the founder of Pakistan’s nuclear program. He hailed the latter as vital for Pakistan and as part of his idea to make the country self-sufficient.

A few years of rule saw him become rather unpopular and supposedly involved in the murder of an opposition leader. He was blamed for being the main culprit in this controversy. His policies of Islamization and Nepotism (assigning family members into positions of power) also gradually turned the public against him. He sought complete assumption of the ruling power in Pakistan. His dictator-typical paranoia saw him establishing the so-called FSF (Federal Security Force). It was not too far from an organization like the KGB.

As a result of his policies, a rift was forming even in his own party. Zulfikar tried to prove his popularity among the people by organizing elections in 1977. The Pakistan People’s Party won the majority of votes. The opposition, however, accused him forging the results. Following the civil unrest in the aftermath of the elections, Zulfikar Ali Bhutto was arrested by the military. His government was immediately declared illegitimate. He was tried for conspiracy and sentenced to death by hanging.

Zulfikar Ali Bhutto shall be remembered as an eloquent and energetic man. His aristocratic manners quickly charmed anyone to speak with him. This did not really fit in his self-proclaimed imaged of “Ruler of the People”. Officially, he married two times. First, to his cousin, Shireen Amir Begum, in 1943, whom he later left. He married a second time, to Nusrat Isphahani in 1951, from whom he had 4 children. There is a popular piece of information that he allegedly married the beautiful Husna Sheikh in secrecy, and kept the marriage in secret for a long time. The public heard of the marriage only when he was imprisoned in 1977. It is believed that she moved to live with him in the aftermath of the Bangladesh independence. Bhutto also wrote more than a dozen publications on international relations and the state of Pakistan.

Despite his few years of handling the political wheel in Pakistan, Zulfikar Ali Bhutto will remain one of the most recognizable Pakistani statesmen. His incredible energy and expertise in the area of international relations saw his country grow in influence in Asia. It was his decisive leadership which lay the foundations to an almost isolated country’s nuclear program. An exciting personal life, charming personality and incredibly intelligent persona made him a memorable encounter even when out of the political arena. Controversial, with his own understanding of democracy, Bhutto will forever be associated with one of the most dynamic periods in Pakistan’s history.