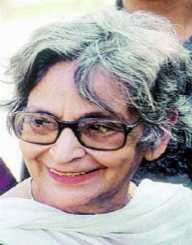 Amrita Kaur was born on August 31, 1919, in Gujranwala, Punjab, British India (now simply India). Her parents were Raj Bibi and Kartar Singh. Sadly, her Amrita’s mother died when she was just a child. As a teenager, Amrita was married and changed her last name to Pritam. This is the name she is best known for now.

Pritam’s career began early in life, as she started writing poetry when Amrita Pritam was just a teenager. Her poetry was so great from the beginning that the first book of poems called Amrit Lehran was published when she was only sixteen years old.

From the mid-1930’s to early 1940’s, Amrita Pritam focused on her writing. During this time, she published over half a dozen poetry books. These books are listed below.

In the 1940’s, Amrita Pritam continued to focus on her writing, but she also joined the Lahore Radio Station. While here, she promoted social works to improve the lives of the people of India. During the late 1940’s, there were riots in the streets of India. During this stressful and deadly time, Pritam escaped the Punjabi area and moved to New Delhi. She stayed here for several years to ensure her safety.

In 1950, he penned her first major novel titled Pinjar. Here, Amrita Pritam wrote about her struggles with the riots, as well as the way the riots affected other women in the area. Throughout most of the 1950’s and 1960’s, Pritam focused primarily on her writing. During this time, she published several poetry books as well as novels.

In 1976, Amrita Pritam published her first major autobiographical work, Rasidi Ticket. She also published two other autobiographies in her lifetime: Shadows of Words and A Revenue Stamp. Some of her other famous works are listed below.

Amrita Pritam won some awards, mostly for her writing. Some of her most prestigious awards are listed below.

Amrita Pritam has also earned several honorary degrees from the following universities: Delhi University, Jabalpur University, and Vishwa Bharati. It should be noted that Pritam never actually attended a university or college.

She was also a member of the Ordre des Arts et des Lettres.

Amrita Pritam was married to Pritam Singh in 1936. Together, the couple had two children. Sadly, the marriage was not a happy one, and Amrita separated from Singh in 1960. Although she never married again, she did live with another man (Imroz) who she was presumed to have a romantic relationship with for about 40 years.

Near the end of her life, Amrita Pritam was known to have been very ill. She died on October 31, 2005, in Delhi, India. She was 85 years old when she passed away.

In 2007, a music artist named Gulzar released an album called Amrita recited by Gulzar. The album had Gulzar singing Pritam’s poems over music.