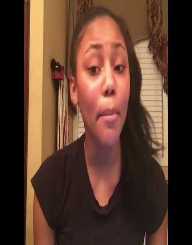 Supa Peach was born on March 7, 2003 in British Virginia Islands. She was born to her mother Josetta. She has an elder sister called Precious Peach who is also her manager. She is fourteen years old. She is an American singer, dancer, rapper and model. She is also a famous YouTube Personality. Her family moved to Atlanta, Georgia to enable her pursue her career exhaustively. She can also act hence she is a multi-talented artist. She is popularly known for her participation in the Lifetime television series ‘The Rap Game’. She participated in the series when she was only twelve years old. She was in the series alongside four other contestants.

Supa Peach released a single titled ‘Run It’ where she sang and also danced. She also released the single ‘Pretty Gang’ which was produced by James Worthy. She has a YouTube channel titled ‘SupaPeachWorld’ which has over one hundred and seventy six thousand subscriptions. Her channel has also garnered over forty million views on its videos. She is also active on other social media platforms such as Twitter and Instagram. She has six hundred and eleven thousand followers on Instagram and twenty six thousand followers on Twitter.

Supa Peach started performing at a very young age. She loves singing, rapping, and dancing. She also loves fashion hence modelling falls into the list of the things she enjoys doing. She is a famous YouTube personality as she posts videos of her singing, dancing, and rapping on her YouTube channel. Her popularity shot to the roof when she participated in the Lifetime reality show ‘The Rap Game’ which began in January 2016. She and four other contestants were chosen by Jermaine Dupri to compete for a chance to be signed by his recording label, So So Def Recordings Label.

Supa Peach did not win the competition, but the experience opened her path to more success to come. She learnt a lot on how to improve her skills and how to make it to the top by one’s efforts. She has released two singles in her career so far. The singles include ‘Run It’ and ‘Pretty Gang’ which was produced by James Worthy. Pictures of Peach and James Worthy in the studio have been circulating in the social media platform, and people suspect that they are working together.

Supa Peach is a multi-talented artist who can sing, dance, rap, and model. She is open-minded and hardworking. She struggles so much to ensure that her career grows into something great. With the support of her mother and elder sister, she is sure to make it in the music industry. Her participation in ‘The Rap Game’ however brought her into conflict with her fellow contestants, but she stated that the show helped her learn a lot of new things. She considered herself to be the best among the other four contestants.

Supa Peach is optimistic, and she not nor react violently to negative comments as she knows that they are part of being famous. Jermaine Dupri advised her always to be ready and at the top of her game at all times no matter what is thrown at her. She has conflicts with Miss Mulatto who was her fellow contestant. Mulatto claimed that he did not write her lyrics alone but was helped by her mother and sister.

Peach admitted that her mother helped her sometimes and Mulatto used that fact against her. The conflict brought so many negative comments towards her, but she was not affected as she said that even superstars like Michael Jackson received negative comments, but they still achieved what they wanted to accomplish in their careers.

Supa Peach was born in the British Virgin Islands, but her family later moved to Atlanta, Georgia to enable her to pursue her career. Her family is loving and caring. Her mother Josetta and her elder sister Precious Peach support her fully in her efforts to become a successful rapper and singer.