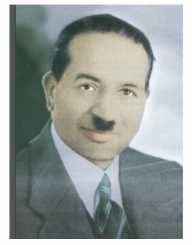 Shanti Swaroop Bhatnagar was born on February 21st, 1894. He was a renowned scientist and a chemistry professor for a period lasting more than 19 years. He also served on the Council of Scientific and Industrial Research’s -CSIR first director. Besides this, he also served as the University Grants Commission’s first chairman. In honor of his scientific contributions, CSIR came up with an award under this own name, Shanti Swarup Bhatnagar Prize for Science and Technology.

Shanti Swaroop Bhatnagar was born on February 21st, 1894 in Bhera, Punjab. This is a region found in British India. He was the son of Parmeshwari Sahai Bhatnagar and his wife. His father worked as a schoolmaster. Sadly, Parmeshwari passed away when Bhatnagar was only eight months old. As a result, Bhatnagar had to be raised by his grandfather. His grandfather had a huge influence in the strong liking he had for engineering and science. When he was young, he used to build electronic batteries, string telephones, and mechanical toys.

For his high school education, Shanti Swaroop Bhatnagar enrolled with DAV High School located in Sikandarabad. After this, he enrolled at Dayal Singh College. While studying in college, he became part of the Saraswati Stage Society. He was hailed for being a talented actor. At some point, he wrote a play named Karamati which means Wonderworker. He was later awarded for this work in 1912 after having written the best play of the year.

Later on, Shanti Swaroop Bhatnagar joined the Punjab University where he completed his intermediate examinations in 1913. His entry into Forman Christian College followed this. It is from this institution that he earned his Bachelor of Science degree in 1916. Three years later in 1919, he graduated with master’s degree in Chemistry.

Upon returning to India in 1921, Shanti Swaroop Bhatnagar enrolled with Banaras Hindu University –BHU. During this period, he joined the university as a chemistry professor. He tutored in BHU for the next three years. Additionally, Bhatnagar is best remembered by the institution for writing their university song called ‘Kulgeet’.

After some time, he shifted to the University of the Punjab where he offered his services as a physical chemistry professor as well as the Director of University Chemical Laboratories. It is during this time that Bhatnagar was most active in his scientific career. Part of his main areas of focus while carrying out his research was on industrial chemistry, colloids and emulsions. Nonetheless, he had a profound influence in magneto-chemistry. This was research detailing the use of magnetic fields in studying chemical reactions.

Shanti Swaroop Bhatnagar also did his best in solving some industrial issues for some companies such as Delhi Cloth & General Mills, Ganesh Flour Mills Ltd., J.K. Mills Ltd., Steel Brothers & Co. Ltd., and Tata Oil Mills Ltd.
In 1940, the Board of Scientific and Industrial Research –BSIR was established. Bhatnagar, being the leading scientist during this time, he was chosen to serve as the organization’s director. The following year, he motivated the government to further invest in industrial research. For that reason, he pushed for the establishment of Industrial Research Utilisation Committee.

The following year, in 1942, an independent body called Council of Scientific and Industrial Research – CSIR was established. This body depended on IRUC & BSIR for scientific advice.

Part of Shanti Swaroop Bhatnagar’s major works was the fact that he aided in enhancing the procedure that was used in drilling crude oil. He is also credited for having been behind the formation of some chemical industries in India. Some of them include Central Food Processing Technological Institute in Mysore, the National Physical Laboratory in New Delhi, the Central Fuel Institute in Dhanbad and several others.
Personal Life

Shanti Swaroop Bhatnagar was the husband of Lajwanti who passed away in 1946.

Shanti Swaroop Bhatnagar died on January 1st, in 1955. He suffered from a heart attack leading to his death at the age of 60.