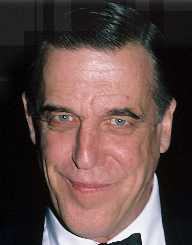 Fred Gwynne was an American actor and artist.

Frederick Hubbard Gwynne was born in New York City, on July 10, 1926. His father, Frederick, was a prominent stockbroker. His mother, Dorothy, was a cartoonist. His family moved around a lot because of his father’s job. He studied at the Groton School in Massachusetts. He was part of the U. S. Navy during World War II. After that, he spent a while at the Phoenix School of Design in New York. He then enrolled at Harvard University. He graduated in 1951.

At Harvard, Fred Gwynne was part of the Hasty Pudding Theatrical organization. After his graduation, he joined the Brattle Theatre Company. He worked different jobs to support himself, including copywriting. He had his first Broadway success in 1952. He played the role of a gangster in the comedy play Mrs. McThing.

Gwynne made his film debut in 1954. He had a small role in the crime drama On the Waterfront, starring Marlon Brando. He then appeared in two episodes of the sitcom The Phil Silvers Show. In 1961, he got one of the lead roles in the sitcom Car 54, Where Are You. He played a patrolman called Francis Muldoon. The show lasted for two years. After that, he got the lead part in the comedy show The Munsters. He played Herman Munster, a funny and lovable parody of Frankenstein’s monster. It became the most famous role of his career.

Fred Gwynne appeared in a few other plays, such as Cat on a Hot Tin Roof and Our Town. He also had smaller parts in many films, such as Ironweed, Fatal Attraction, Simon, and many others. Still, he was best known for his role as Munster. In 1981, he starred in the television film The Munsters’ Revenge. He eventually gave up on acting. He spent the rest of his career doing voiceovers for television and radio. He had one final film part in 1992. He played a judge in the comedy My Cousin Vinny.

While at Harvard, Fred Gwynne drew cartoons for the Harvard Lampoon. He eventually became the publication’s president. He continued drawing and painting during his acting career. He wrote and illustrated many children’s books, such as The King Who Rained, A Little Pigeon Toad, and many others. He also held several exhibitions for his artwork.

Fred Gwynne married Jean Reynard, a famous socialite, in 1952. They had daughters Gaynor and Madyn, and sons Kieron, Evan, and Dylan. They got a divorce in 1980. Eight years later, he married Deborah Flater.

Fred Gwynne had pancreatic cancer. He died on July 2, 1993, in his home in Maryland. He was buried at the Sandy Mount United Methodist Cemetery.