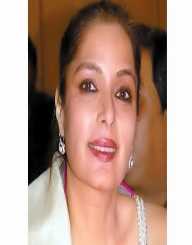 Babra Sharif was born 10th December 1954, in Lahore, Pakistan. She was born into a middle-class family and showed a keen interest in show business from a young age. Babra Sharif started modeling when she was 12 years old. In 1973 she filmed a washing powder commercial for “Jet.” It shot her to stardom, and she became known as the “Jet” powder girl. That same year, she started appearing in different television shows on Pakistani television.

Her fame was cemented when she did a commercial for Lux in Pakistan. As Babra Sharif’s stardom grew, she moved into the world of cinema and film. In 1974 she signed with both Shamim Ara and S. Sulaiman, who both wanted Babra Sharif to act in movies they were doing. Babra Sharif had a prolific filming career, appearing in over 100 movies during that time. The height of her career was the late 70s to the late 80s. Her genre was acting in movies for Pakistani cinema.

Babra Sharif’s movie career started to decline in the early 1990s until by the mid-90s she was seldom seen. After taking a break, she had a comeback success in the 1995 film, Ham Nahin ya tum Nahin. This was followed by three further successes. Babra Sharif's last movie was released in 1997, called Ghayal.

Babra Sharif took part in a television commercial for Lux, celebrating 50 years. The commercial was filmed in 2005. After her acting career, Sharif opened a jewelry store in Karachi.

In Pakistan, Nigar Magazine has an awards ceremony called the Nigar Awards. The awards are held annually and are for those who make outstanding achievements to Pakistani cinema.

Babra Sharif has won eight Nigar awards, seven of them being for Best Actress. She has been acclaimed by some as the great actress of her time in Pakistan.

Babra Sharif married Shahid in 1977, but the marriage only lasted a year, with the couple divorcing in 1978.