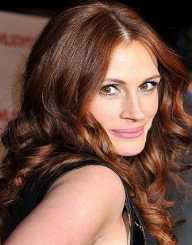 Julia Fiona Roberts is arguably the best actress of recent times. The American actress is known for her elegance and acting prowess. Julia is a former model and a film producer. She currently resides in Malibu.

On 28th October 1967, Julia Fiona Roberts was born in Georgia. Her parents, Walter Grady Roberts and Betty Lou Motes were both in the acting industry.

Julia's father sold vacuum cleaners while her mother held a secretary's position in a church. Walter and Betty held classes for upcoming actors. Betty was also an acting coach.

Julia was born with roots from Germany, England, Sweden, and Scotland. She was the third and the last born in her family after Daniel Roberts and Lisa Roberts.

In 1972, Julia Robert's parents separated and later divorced. Little Julia went to live with her mother. Julia grew up in a dysfunctional family. Robert's biological father later died of cancer when she was 10 years old.

Betty remarried Michael Motes, and the couple had a daughter, Nancy Motes. Motes abused Julia's mother and never got a real job. Betty filed for a divorce, and it was finalized in 1983.

As a young girl, Julia loved animals. This made her want to pursue veterinary medicine. Julia never dreamed of being an actress.

As she grew older, she discovered that she had an acting talent. This was not a surprise considering her mother's acting background. She was also inspired by her elder brother, Daniel who was making it big time in acting.

Julia decided to give the film industry a shot and followed suit in the family business.

Julia's school journey is that of a typical American child. After Julia's parents had separated, Julia joined Fitzhugh Lee Elementary School. She continued with her studied and later joined Griffin Middle School.

After completing middle school, Julia joined Campbell High School for her diploma which she completed in 1985.

Julia still had not decided on what she wanted to do. She enrolled at Georgia State University where she studied journalism. Half-way through the course, Julia decided to drop out and pursue an acting career.

Julia left for Ney York with much enthusiasm. She was determined to penetrate the tough industry. Life as a grown-up in New York wasn't easy. She had to look for a way to support herself financially. She signed up with Click Modeling Agency in New York.

Modeling was natural for her because of her bright smile, slender frame and a height of 5'9. She also enrolled in acting training.

In 1988, she featured on Mystic Pizza and Satisfaction. Immediately, the audience was smitten. Steel Magnolias, a movie she featured in earned her an Academy Award nomination in 1989.

Julia's star was beginning to shine. In 1990, Julia starred in Pretty Woman, a romantic comedy where she acted as a hooker. This famous movie put her on the growing talent list.

In 1993, Julia Roberts featured in The Pelican Brief beside star Denzel Washington. The industry was gradually accepting her.

Julia since featured in movies like Mary Reilly in 1996, Conspiracy Theory in 1997 and Runaway Bride among others.

The crowning moment of her already successful career came after winning an Oscar Award in 2001. The leading role ‘Erin Brockovich,' a single mother of three who lands a job in a law firm without any skills.

She accidentally comes across some medical records in a real estate file. She convinces attorney Ed Masry to allow her to investigate. She realizes that the documents were part of a cover-up of an illegal water project that was causing serious illness in the community.

Julia has in the past turned down roles that she deemed unfit for her. In 1998, she turned down the female lead in Shakespeare in Love.

This role earned her a series of awards. Her acting finesse was best demonstrated in this part. In 2006, Julia performed in' Three Days of Raining' on Broadway. This was her Broadway debut.

Every actor dreams of winning an Oscar Award. Julia's dream came true after she was awarded this prestigious award in 2001. This was after an exemplary performance in the movie ‘Erin Brockovich.' This role saw her get paid a salary of $ 20 million.

Julia Roberts won The People's Choice Award for three consecutive years. She won the award in 2003, in 2004 and 2005. She won favor from the audience after her role in Ocean's Eleven and Ocean's Twelve.

Julia took her career a notch higher and accepted a challenging role in ‘Closer.' She had matured as an actress.

Julia has also produced films. She was the Executive Producer of ‘Queens Supreme' in 2008. Julia is currently one of the highest-paid actresses in Hollywood.

The ‘Three Days of Rain' show earned $12 million after running for only twelve weeks. Julia's movies collectively have made over $20 billion.

Julia Roberts was ranked 66th in the UK magazine, Empire on the list of the ‘Top 100 Movie Stars of all Time'. Julia was named among the top 50 most beautiful people in the world by The People's Magazine.

Julia Roberts is a mother of three children and an aunt to Emma Roberts. She has had quite an adventure in her dating life. Julia was previously known was dating celebrities. She later settled down and married Lyle Lovett on June 25, 1993. Two years later, the relationship came to an end, and their divorce was finalized in 1995.

After her first failed relationship, Julia was in and out of different relationships. On July 4th, 2002, Julia decided to give marriage another shot and married Danny Moder.

Her passion for animals has always been intact. Her favorite animal pet is a dog.

Julia is currently worth $ 140 million. She has a rank in Taos, New Mexico and a mansion worth 15 million pounds.

Julia has always had a big heart. She has made numerous monetary donations to UNICEF. Julia is an active environment conservationist. To set an example, Julia uses chlorine-free diapers on her twins and the plastic-free disposable diapers.

Julia is a spokesperson for the biodiesel company. She strongly believes that ethanol and biodiesel are the safest products and for reduction of air pollution.

In 2006, Julia showed her support in the ‘Make Poverty History.' She participated in the ONE campaign advertisement. The World Trade Center attack that claimed 6,500 lives touched the hearts of many including Julia Roberts. She donated $ 2 million for the survivors.

Julia has a strong passion for people suffering from Rett Syndrome. She narrated ‘Silent Angels' documentary in solidarity with Rett Syndrome awareness campaign.

When Julie is not wowing the world on screen, she enjoys knitting. Julia Roberts is also a yoga fan both for physical fitness and unwinding. She loves to read. Amongst her favorite books are' the heart is a Lonely Hunter' by Carson McCullers and' The Wild Palms ‘ by William Faulkner.