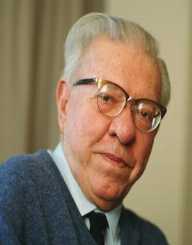 Fred Hoyle was born 24th June 1915, to Ben and Mabel Hoyle. He was born in West Riding of Yorkshire, in England. Hoyle's father worked in the textile industry, and he was also a talented violinist. His mother was a performing pianist.

Hoyle first studied at Bingley Grammar School, and this was followed by enrolling at Emmanuel College, Cambridge.

Hoyle left Cambridge in 1940. He moved to Portsmouth to help with the war effort. Hence, he worked for the government. His specialty was research into radars.

He worked on projects such as defining the altitude of airplanes as they flew in. He also worked on inventing measures to stop guns that were guided by radar.

The British government had more employees on their radar project than the U.S. had to work on their Manhattan project. This was quite extraordinary.

Hoyle worked very closely with Thomas Gold and Hermann Bondi. Gold was an astrophysicist, Bondi was an astronomer and mathematician. The three men had many in-depth discussions on cosmology. His work paid well, and he traveled to America.

During his travels, Hoyle met other astronomers. As a result, his knowledge of astronomy and science grew, including learning about supernovae.

On one of his trips to Canada, Hoyle studied nuclear physics, specifically the implosion and explosion of plutonium.

Most importantly, in 1954, he published his trailblazing work on supernova nucleosynthesis. Hoyle returned to Cambridge and established a group that studied stellar nucleosynthesis.

Hoyle developed a theory on stellar nucleosynthesis which is what he became famous for.

He also coined the now famous expression, "the big bang". While he didn't believe in the universe starting with a "big bang", he did believe it was expanding.

He joined the staff at Cambridge University in 1945 as a lecturer. In 1958, he became Plumian Professor of Astronomy and Experimental Philosophy at the University.

Cambridge established its Institute of Astronomy in 1967, with Hoyle becoming the founding director. The Institute quickly earned the reputation of being the best place to learn theoretical astrophysics in the world.

From 1945 to 1973, Hoyle established himself as the leading authority the world-over in astrophysics. He introduced many different theories, some controversial, in his field.

He was often at odds with other faculty members at Cambridge, and in the science community. Hoyle never received a Nobel Prize in Physics. He missed out more than once, and scientists believe it is because of controversial comments he made to peers.

Hoyle retired from Cambridge and the Institute in 1973. He then began to concentrate on writing in the genres of science and science fiction.

He moved to the country after his retirement and went for long walks between writing. On one occasion, in 1997, he fell into a ravine. A search dog found Hoyle 12 hours later. As a result, he was in the hospital for two months.

Hoyle was never the same, and in 2001, after several strokes, he died on 20th August.

Hoyle received many awards and honors, some of which include: