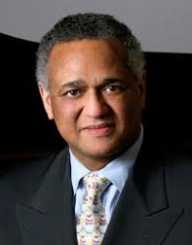 Pianist Andre Watts was born on the 20 June 1946 in Nuremberg, Germany. At the time of Watts ‘ birth, his father Herman Watts was an African-American stationed in the U.S. Army in Europe. His mother, Maria Gusmits, was Hungarian.

The family relocated to the United States, settling in Philadelphia, Pennsylvania in 1954. Watts showed musical ability as a child and was taught the violin and piano at a young age. His parents divorced in 1962 and Watts was raised by his mother.

A pianist, she encouraged her son to study piano and practice. To support herself and her son, she worked in an office doing administration and secretarial work. Watts won a competition at the age of nine when he played a Hayden concerto. The prize was the opportunity to perform with the Philadelphia Orchestra Children's Concerts.

Andre Watts was accepted into the Philadelphia Musical Academy and graduated in 1963. In 1972, he was awarded a degree in Music from the Peabody Institute, Baltimore.

Andre Watts was 16 when he rose to public attention with Leonard Bernstein debut with the New York Philharmonic at a Young People’s Concert which was broadcast on CBS-TV.  The young pianist was an overnight sensation.

Bernstein subsequently asked him to substitute for the ailing pianist Glenn Gould in performances of Liszt’s E-flat Concerto with the New York Philarmonic. His mother and manager, Maria Gusmits, allowed him to play six concerts only for the first year, allowing Watts to finalize college.

Andre Watts has performed with all the major orchestras in the United States and also appears at major summer music festivals. He has appeared in thousands of concerts. In 2011, he took part in the Liszt anniversary celebrations, playing all-Liszt recitals around the country. Watts also tours internationally and has appeared internationally in Europe and Asia. In 2017 he toured with the Orpheus Chamber Orchestra and in 2018 was the featured soloist with the Philadelphia Orchestra for the opening concerts of the 18/19 season.

Andre Watts often appears on television, and his 1976 New York performance for Live From Lincoln Center was the first full-length recital broadcast on television. Watts won an Emmy Award nomination for Outstanding Individual Achievement in Cultural Programming for his performance at the 38th Casals Festival held in Puerto Rico.

In May 2004, Watts was appointed to the Jack I. and Dora B. Hamlin Endowed Chair in Music at the Indiana University’s Jacobs School of Music. Indiana University appointed Watts, a Distinguished Professor in 2017. Recordings include The Complete Columbia Album Collection, a 12 CD set.

Andre Watts received the President’s National Medal of Arts in 2011. In 2006, he was inducted into the Hollywood Bowl of Fame which marked the 50th anniversary of his debut with the Philadelphia Orchestra. He has also received various academic honors including an honorary doctorate from Yale University (1973) and an Honorary Doctorate from Albright College (1975). He was inducted into the American Classical Music Hall of Fame in 2013 and 2014, was awarded the MacDowell Medal by the Cincinnati MacDowell Society.

In August 2016, Andre Watts' publicist announced that his client had been diagnosed with prostate cancer.

Andre Watts wife is Joan Brand whom he married in 1995.