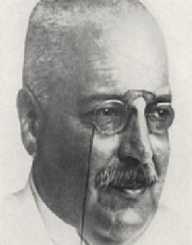 Alois Alzheimer was a German-born neuropathologist and psychiatrist credited to have discovered dementia, a disease that was later named after him.

As a doctor at a hospital in Frankfurt, Alzheimer came across a woman with a progressive memory loss; he extensively worked on the condition. His success led to the condition being named after him.

Alois Alzheimer was born on 14th June 1864, in Marktbreit Germany. Alzheimer’s father worked in his hometown as a notary public.

During his time in the university Alzheimer was an active member of the fencing fraternity team. He was an excellent science student. He went on to study medicine at Aschaffenburg and later to join Berlin, and Tubingen universities. After completing his doctoral thesis at Wurzburg University, he graduated in 1887, with a degree in medicine.

One year after his graduation, Alois Alzheimer started working as a resident at a Mentally Ill and Epileptics hospital based in Frankfurt, Germany. He was later promoted to a senior physician position in the hospital. Together with Franz Nissl, they researched the nervous system pathology. Their research was later published as Zeitschrift für die Gesamte Neurologie und Psychiatrie.

During his time at Frankfurt, he met Emil Kraepelin, a man who went on to be his mentor. The two worked so closely until Kraepelin moved to Munich in 1903. He was later invited to Munich by his mentor, Alzheimer honored the invitation. Despite the many challenges the two-faced, they accomplished a lot together in the psychiatric community.

Alois Alzheimer married Cecilia Geisenheimer, on April 1894. The two went on to have three children. His wife, however, passed on later in 1901, their three kids were left in the hand of Alzheimer’s young sister.

Alois Alzheimer was appointed the professor of psychiatry by King Wilhelm II of Prussia. Despite his deteriorating health, he spent the last of his three years in clinical work and research.

Alois Alzheimer became a professor of medicine at Ludwig Maximilian University in 1908.

On his way to the university on a train, Alois Alzheimer fell ill, many alluding that he had been infected with a streptococcal infection, which later led to heart and kidney failure.

At the age of 51, Alzheimer had a cardiac arrest which resulted from inflammation in one part of his heart. The condition leads to his death on 19th December 1915. He was laid to rest in Hauptfriedhof next to his wife.