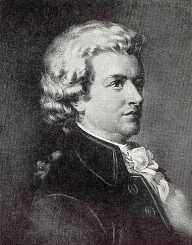 Wolfgang Mozart was born on 27th January 1756, to Leopold and Anna Maria Mozart. He was born in Salzburg, Austria. At the time of his birth, Austria was part of the Holy Roman Empire. He came from a large family, with six siblings.

Wolfgang Mozart's father was a talented musician. He came from Augsburg in Germany originally and was a composer as well as a teacher. Leopold was a violinist in the orchestra of the Prince-Archbishop of Salzburg. In 1763, he became second-in-charge of the orchestra, and he also wrote a violin textbook.

Wolfgang Mozart observed and learnt from his father. He was composing by age five, with his father writing the pieces as Mozart played them to him. His father not only taught music, but he also taught the children their academic subjects and languages.

In 1762, Wolfgang Mozart's family began a tour of Europe, in which Wolfgang Mozart and his sister performed in royal courts, and then took part in an extensive concert tour over the next three and a half years. The tour took in cities such as Munich, Paris, London, and The Hague.

Wolfgang Mozart met Johann Christian Bach, and he went to visit with Bach in London during 1764 and 1765.

Wolfgang Mozart was eight years old when he wrote his first symphony. Leopold took his son to Italy in 1769 to establish him as a composer and performer. They were there for two years, and Mozart was accepted into the Accademia Filarmonica. In 1770, he wrote the opera, Mitridate, re di Ponto, which was a great success. He received further commissions to write operas, but unfortunately never met with the success or professional appointment his father hoped he would have.

In 1773, the men returned to Salzburg and were reunited as a family. Wolfgang Mozart took up employment as a court musician for Prince-Archbishop Hieronymus Colloredo, who was the ruler at the time. He enjoyed great popularity in Salzburg, and he composed prolifically across a broad range of genres including symphonies, sonatas, and string quartets amongst others. Unfortunately for him, the salary was meager, and he continually looked to try and find another position which would be more fulfilling for him.

Once again, Wolfgang Mozart and his father started to travel. Their first visit was to Vienna in 1773, followed by Munich in 1774, with no success. In 1778  he travelled to Paris while his father was in Salzburg trying to find employment for him. He started selling valuable possessions to pay for his keep as he fell into debt with no work. During this period his mother died.

Wolfgang Mozart was offered a position in Salzburg as court organist and Concertmaster. He was reluctant to return to the city, but after many delays, and with no other prospects, he had no choice, and began in his new position in January 1779.

Wolfgang Mozart's opera, Idomeneo, premiered in January 1781 in Munich. It was met with great success, and shortly after, Mozart was invited to Vienna to join Archbishop Colloredo, his employer. Colloredo was in Vienna for the accession of Joseph II to the throne in Austria. Although Colloredo was only looking to have his musician within close range, Wolfgang Mozart was determined to make himself known to Colloredo, and eventually did so.

Wolfgang Mozart tried to resign and was refused, but the quarrel didn’t abate, and eventually, he left his employment with Colloredo. He decided he would stay in Vienna and work freelance as both a performer and composer. His new career went very well, and he was soon established as the best keyboard player in Vienna, as well as an accomplished composer.

His next opera, Die Entfuhrungaus dem Serail, was finished in 1782 and met with resounding success. Mozart was now well-established as a composer.

For the next two years, Wolfgang Mozart studied the works of both Bach and Handel. In 1784, he also met Joseph Haydn, another significant composer, and the two men were to become the best of friends.

He undertook a concert tour between 1782 and 1785, which proved extremely lucrative for him. He had married some years earlier, and the Wolfgang Mozart family started living a lavish lifestyle.

In 1784, he joined the Freemasons, who would continue to play an important role for the rest of his life.

In 1785, Wolfgang Mozart returned to writing opera. In collaboration with Lorenzo Da Ponte, he wrote The Marriage of Figaro, and in 1787, Don Giovanni. Both operas were outstanding successes. During this time, his father died.

In 1787, he was appointed Chamber Composer for Emperor Joseph II. The role was only part time, but it paid very well for the required hours of work. Shortly after, the Austro-Turkish War began, and the music was put on the back-burner as the aristocracy turned to the trouble at hand.

Wolfgang Mozart's income decreased substantially, and he was thankful for his part-time role with the Emperor. It wasn’t enough though, and he started to go into debt to support his family. The next couple of years were very tough ones, but in 1790 his fortunes turned, and money began freeing up again for music.

Wolfgang Mozart stopped borrowing money, and he began to pay back his debt. He was very productive again with his composing, and during this period wrote The Magic Flute which became very popular.

In 1791, he took ill in September. Although he tried to continue working, by November, he was bedridden. In December he died at the age of 35, official cause, unknown.

1777: Awarded Knight of the Order of the Golden Spur by Pope Clement XIV.

Wolfgang Mozart married Constanze Weber in August 1782. The couple had six children together, although four of them died in infancy.

Wolfgang Mozart is one of the most famous composers of all time. His music is played as much today as it was in years past.