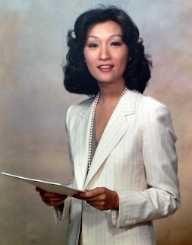 One of the most well-known newscasters of the 20th Century, Connie Chung is most famous for being the first woman co-anchor on CBS evening news.

Connie Chung is the first Asian woman news anchor in America, and she has worked with major networks such as CBS, ABS, CNN & NBC. For her strong appearance and presentation, she has also won an Emmy award.

Connie Chung was born on August 20, 1946. Her star sign is Leo, and her birthplace is Washington, D.C. She had four sisters and was born into a well-to-do family. Her father William Lee Chung worked for the Chinese intelligence before migrating to the U.S. with his family.

Connie Chung went to the Montgomery Blair High School for early education. She graduated with a degree in journalism in 1969.

Connie Chung entered journalism right after finishing her education. She joined the WTTG-TV where she worked till 1976 as a journalist. Chung interviewed Richard Nixon during the infamous Watergate scandal. At CBS, Connie Chung rose through the ranks to become the lead news anchor for KCBS – the LA local CBS affiliate. In 1983, Chung shifted to NBC as an established journalist. Her popularity continued to rise while working at NBC and CBS signed her up again for a talk show Face to Face with Connie Chung.

The program focused on interviewing celebrities and famous personalities. The program was criticized for not focusing on news, and rather wasting time on brainless entertainment by the media. Face to Face with Connie Chung ended shortly after Chung decided to reduce her workload for getting pregnant. Instead, she started a magazine named Eye to Eye with Connie Chung. Chung became the first woman co-anchor of the evening news broadcast for CBS in 1993.

Chung’s celebrated career came to a sudden halt when CBS removed her from the co-anchor position in 1995. In an interview with Kathleen Gingrich, mother of the Speaker of the House Newt Gingrich, Chung tried to coerce her into admitting that Newt called Hillary Clinton “a bitch.” This did not go down well with the viewers. In her defense, Chung said she was playful.

Connie Chung declined the offer of substitute anchor and her association with CBS ended.

After the CBS controversy, Chung started working with ABC for 20/20 – a news magazine in 1997. Connie Chung famously interviewed Gary Condit, a congressman after the disappearance of a woman named Chandra Levy – a high profile case.

Connie Chung went to work for CNN in 2002 but was removed in 2003. Chung took a break from her work after this. She came back on television in 2006, to host a show Weekends with Maury & Connie. The show failed to impress the audience and was canceled after six months. She is also a teaching fellow at the John F. Kennedy school of government at the Harvard University.

Connie Chung is married to Maury Povich – a talk show host. They have an adopted son named Matthew Jay Povich. She follows Judaism.