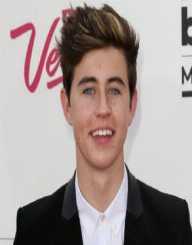 Today youth unlike that of the early 21stcentury ones have taken advantage of Social media and are making the best out of it. With the inception of social media networks like YouTube, Instagram, Facebook, and Twitter among others, it is not difficult to sell one's talent to the world. One of the youths taking advantage of these platforms is Alex Holtti. Alexander Tobias Holti best known as Alex Holtti is a very popular Danish social media enthusiast.  Born on September 1, 1994, he is very prominent on YouTube and Vine.  Alex Holtti gained popularity as the comedic Vine creator. His social media presence started with the creation of a Vine account and had since then explored opportunities on Twitter, Instagram, and YouTube.

Alex Holtti has a good connection with other Viners like Brent Rivera who he usually collaborates with.With his astronomical growth on Vine, he had an advertisement deal with McDonald's and had since created several funny Vines for them. Aside from his social media presence, he is also a good singer and does covers of popular songs. In 2016, he partook in the EGO Tour with other social media stars like Brent Rivera, Liza Koshy, Tasia Alexis, Jake Paul and several others.

Alex Holtti was born on September 1, 1994, in Denmark to Anne Elisabeth Lander. He is the third child of four by his parents. His siblings are Louisa, Emily, and Mathilde as well as six other stepsiblings. At a very young age,  Alex Holtti parent divorced but would later reconcile. His interest in social media began at a young age when he used his Facebook page to promote his stepbrother Markus Lander during a skateboarding contest.

Alex Holtti’s father loved music and played piano and guitar, an act his children picked. Holtti also became interested in music and acting and has since been working on how to make a career out of it.

Growing up,  Alex Holtti took an interest in music and acting and to display his talent to the rest of the world; he resorted to Vine. He used the platform to post short videos of himself, and that took a dramatic change in his life. He has since the creation of his Vine account gained 3.5 million fans who follow his account for video updates. Cementing his presence on Vine, he also explored the opportunities on YouTube by creating the channel AlexHoltti, to reach out to a wider public. There, he posted his covers of popular songs, funny reaction videos and took on challenges.

Alex Holtti is also famous for his expectation vs. reality videos. The channel has about one million subscribers. He has also created another channel Alex Holtti Two for vlogging and posting other videos. Aside from one and YouTube, he is also popular on Twitter with over 195,000 followers and over 438,000 Instagram followers. Alex Holtti started with Vine, but he finds YouTube as his best and favorite platform because that gives him the best opportunity to explore more. Despite this, his presence on the social network has minimisedconsiderably and has not been uploading videos for almost a year now. The ones that he posts are also with no details.

Alex Holtti is best known for the humorous videos he uploads on Vine and YouTube. Though the videos something portrays the silly side of him, is it well received by fans.

Alex Holtti is in a relationship with Luna Overgaard Brejning.

Alex Holtti’s sister Mathilde Alex Holtti is also a social media enthusiast and very popular on Vine. According to  Alex Holtti, he once created a YouTube channel for her.