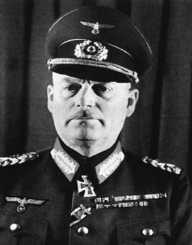 Alfred Josef Ferdinand Jodl born 10th May 1890, to Alfred Jodl and Therese Baumgartner. He was born in Wurzburg, German Empire. He had a younger brother called Ferdinand. His father was an Officer, and his parents didn’t marry until nine years after his birth.

He attended school at the Cadet School in Munich, from which he graduated in 1910.

After graduation, Alfred Jodl went straight into the military, joining the German army as an artillery officer. From 1914 to 1916 he served on the Western Front, and in 1917 he served on the Eastern Front. He was awarded the Iron Cross in both campaigns for his bravery. In 1918, upon defeat of the German Empire, Jodl continued to serve in the German Army. He was promoted to the rank of Major, which put him under the command of General Ludwig Beck.

In 1939, Alfred Jodl was introduced to Adolf Hitler. He was made a commander of the 44th Division from late 1938 to August 1939, during the period that Austria was being annexed to Germany. He was then chosen by Hitler to become Chief of Operation Staff of the OKW. The OKW was newly formed, and was the governing body over the normal armed forces. Alfred Jodl held his position as Germany occupied Denmark and Norway.

Alfred Jodl signed several important documents as part of his tenure. In 1941 he signed the Commissar Order allowing Soviet political commissars to be shot, in 1942 he signed the Commando Order, which allowed any Allied commandos, soldiers and combatants, whether in uniform or not, to be shot immediately if found behind German lines. Last but certainly not least, he signed the “unconditional surrender” documents on 7th May 1945.

Alfred Jodl was then arrested by British troops on 23rd May 1945. He was tried at the Nuremberg trials. He was accused of several acts, including conspiracy to commit crimes against peace, war crimes, and crimes against humanity. Primarily, the evidence against him related to the documents he had signed – the Commissar Order, and the Commando Order. There were additional charges for unlawful deportation, as he signed an order transferring Danish citizens and Jews to concentration camps. He was found guilty of all charges and was executed by hanging in October 1946.

Alfred Jodl was awarded many military honors, including:

Alfred Jodl married Irma Graffin in 1913. She died from pneumonia in 1944, and later that same year he married Luise Von Benda.